The Cliff-edge of Nationalism 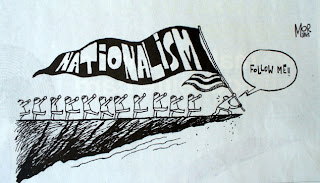 Love of country, in the form of "patriotism," is a late creation. Under serfdom people were bound to the soil but they had no "country". Nor has capital any "country" even though capitalism is the precondition for building a "nation," and advocates "nationalism," and protects  "national market." The development of the capitalist and rise of nationalism has been symbiotic. However, as soon as it can, capital continues to expand and pursue the global market, using its own "nationalism" as a springboard. Simply put, nationalism is anything but natural; it is an ideology of capitalism, which serves to produce the conditions for capitalist accumulation and gives it a legitimacy. In other words, it is not some kind of natural human phenomena. It is a social, political and ideational construction. Once the nation state has been physically constructed as "political sovereign", nationalism provides the glue by which it rationalises and maintains itself, a political ideology,which takes on the role of a supposedly natural basis for social order. It is an ideology, which requires an identity with, and loyalty to, the nation, which, in turn, gives rise to the "national interest" and political duty. The highly statist and often authoritarian goals of these independence movements are seldom taken into consideration.

Many on the Left advance nationalism and the nation-state as a bulwark against imperialism. This is a dangerous fallacy. The role of nationalism has always been a source of conflict on the Left. For those on the Scottish Left the Socialist Party's consistent anti-nationalist position seems to support imperialism. But, imperialism functions quite independently of socialist attitudes toward nationalism and, furthermore, socialists are not required for the launching of struggles for national autonomy as the various independence movements have shown. Also contrary to some Leftist expectations, nationalism could not be utilised to further socialist aims, nor was it a successful strategy to weaken and hasten the demise of capitalism. On the contrary, nationalism frustrated socialism by using it for nationalist ends. It is not the function of socialism to support nationalism, even though the latter battles imperialism. To fight imperialism without simultaneously discouraging nationalism means to fight some imperialists and to support others. To support Palestinian nationalism is to oppose Jewish nationalism, and to support the latter is to fight the former.  It is not possible to support nationalism without also supporting national rivalries. With whom to side? With the Jews? With the Palestinians? With both? Where shall the Jews go to make room for the Palestinian people? What should the Palestinian refugees do to cease being a “threat” to the Jews? Such questions can be raised with reference to every part of the world, and will generally be answered by Jews siding with Jews, Arabs with Arabs, or  French with French, Poles with Poles and so forth. To be a good Indian nationalist is to disparage Pakistan; to be a true Pakistani is to despise India. And so it goes on.  The “liberation” of Cyprus from British rule only opened a new struggle for Cyprus between Greeks and Turks. There is no progressive nationalism. This is not about denying the right of a suppressed people to establish its independence; neither is it about dismissing the need to combat imperialist aggression and exploitation. Resisting one oppressor is not the same as supporting movements that seek to oppress its own people. To oppose an oppressor is not equivalent to calling for support for everything formerly colonized nation-states do. One cannot oppose a wrong when one country commits it, then support another country who commits the same wrong. The enemy of my enemy is not my friend is particularly applicable to oppressed people who may be manipulated by totalitarians and religious zealots. To oppose one evil with a lesser one must eventually lead to the support of the worst evil that emerges.

Although socialists sympathies are with the oppressed, they relate not to emerging nationalism but to the particular plight of twice-oppressed people who face both a native and foreign ruling class. Their national aspirations are in part a sort of  “socialist” aspirations, as it includes an illusory hope of impoverished populations that they can improve their conditions through national independence. Yet national self-determination has not emancipated the labouring class in the advanced nations. It will not do so now in Asia and Africa. National revolutions promise little for the lower class. In a "free" Scotland social relations will not change and the conditions of the exploited class will not improve to any significant extent.

Cultural freedom and variety should not be confused with nationalism. That people should be free to fully develop their own culture is not merely a right but a desirable. Technological resources make it possible for people to choose their own lifestyles. The world will be a drab place indeed if the magnificent mosaic of different customs and traditions disappeared to be replaced by a homogenized world (which modern capitalism appears intent upon spreading with its MacDonaldisation). Similarly, a world completely divided and peoples at odds with one another, parochialising their seeming “cultural differences” to assert their ethinic or racial superiority would also be a backward step.

No matter how utopian the quest for world solidarity may appear in to-days world of conflicts, no other road seems open to escape fratricidal struggles and to attain a rational world society. Socialism will rise again as an global movement and on the basis of past experience, those interested in the rebirth of socialism must stress its internationalism most of all. While it is impossible for a socialists to become a nationalist, we are, nevertheless, anti-colonialist and anti-imperialist. However, the fight against colonialism does not imply adherence to the principle of national self-determination, but expresses our desire for a non-exploitative socialist society without borders. While socialists cannot identify themselves with national struggles, we can as socialists oppose both nationalism and imperialism. It is not the function of Scottish socialists to fight for independence from England but to make Scotland part of a socialist society. We seek to “de-nation” Scotland, "de-nation" England, and integrated them into a socialist one world. When capitalism is overthrown  the world will be on the way to the disappearance of all nation states. Nationalism, in its essence, is a poison. Nationalism has always been a disease that divided human from human. It produces artificial arbitary borders between human beings on trivial linguistic and cultural differences, and it conceals hierarchical and class- based conflicts. There is no “benevolent nationalism.” There is no place in a free society for nation-states. So let us create a truly libertarian form of collectivism. When free associations of producers and confederations of communities replace the nation-state, humanity will have rid itself of nationalism.