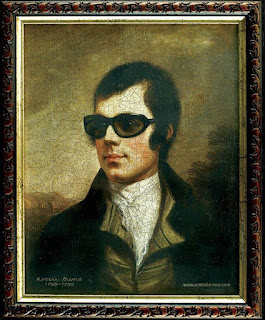 To some, Robert Burns was a political radical and thinker, a seditious revolutionary and a staunch republican. Research suggests that Burns was an active member of The Friends of the People, formed in 1792 and the first organisation in Scottish history to openly call for universal suffrage for all men, rich or poor. This early proto-democracy movement never really had mass support in Scotland, and was crushed by government forces by 1794. "Robert Bruce's March To Bannockburn", better known as "Scots Wha Hae", was written in response to the trial of the radical Thomas Muir. Thomas Muir sentenced to 14 years imprisonment and deportation to Botany Bay, amongst the charges he was indicted with was singing ‘Ca Ira’ in public, an unofficial anthem of the French Revolution. The last line of Scots Wha Hae is “Let us Do or Die!” - was the oath of the French revolutionaries.

Burns was an advocate of "make love not war" as penned in  "I Murder Hate".
"In wars at home I'll spend my blood-
Life-giving wars of Venus.
The deities that I adore
Are Social Peace and Plenty,
I’m better pleased to make one more
Than be the death of twenty.”

In ‘Address of Beelzebub’ Burns uses satire and has the poem’s narrator, Auld Nick, praising the landlord class encouraging them to actually brutalise their tenants even more than they have been doing.

“And they, be Damned, what right hae they
To meat or sleep or light of day
Far less to riches, power or freedom
But what your Lordships like tae gie them.”

"Man Was Made to Mourn - A Dirge" is a cheerless poem and yet another example of Robert Burn's loathing of the class differences between the workers and the land-owners. Burns once told his brother that "he could not well conceive a more mortifying picture of human life than a man seeking work."  Burns felt it was horrible that a "wight," a human being, needing to earn money and wanting to be useful to people, was able to work only by permission of somebody else -  somebody who could make profit from him! That humiliating and desperate "sentiment" came to life with "Man was Made to Mourn," It shows again his deep compassion for the man trying to find work in order to feed and house his family. Two lines raise it to the level of a modern proverb:
'Man's inhumanity to man
Makes countless thousands mourn!'
Throughout history, countless thousands continue to mourn as a result of pain, torture, and loss of life inflicted upon them or those near and dear to them--innocent men, women, and children.

Man Was Made to Mourn - A Dirge

When chill November's surly blast
Made fields and forests bare,
One evening, as I wandered forth,
Along the bank of Ayr,
I spied a man, whose aged step
Seemed weary, worn with care;
His face was furrowed o'er with years,
And hoary was his hair.

"Young stranger, whither wanderest thou?"
Began the reverend sage;
"Does thirst of wealth thy step constrain,
Or youthful pleasure's rage?
Or haply, prest with cares and woes,
Too soon thou has began
To wander forth, with me, to mourn
The miseries of man!

"The sun that overhangs yon moors,
Outspreading far and wide,
Where hundreds labor to support
A haughty lordling's pride --
I've seen yon weary winter sun
Twice forty times return;
And every time has added proof
That man was made to mourn.

"O man, while in the early years,
How prodigal of time!
Misspending all thy precious hours,
Thy glorious youthful prime!
Alternate follies take the sway:
Licentious passions burn;
Which ten-fold force gives nature's law,
That man was made to mourn.

"Look not alone on youthful prime,
Or manhood's active might;
Men then is useful to his kind
Supported in his right;
But see him on the edge of life,
With cares and sorrows worn,
Then age and want, O ill-matched pair!
Show man was made to mourn.

"A few seem favorites of fate,
In pleasure's lap carest;
Yet think not all the rich and great
Are likewise truly blest.
But, oh, what crowds in every land
Are wretched and forlorn!
Through weary life this lesson learn --
That man was made to mourn.

"Many and sharp the numerous ills,
Inwoven with our frame!
More pointed still we make ourselves,
Regret, remorse, and shame!
And man, whose heaven-erected face
The smiles of love adorn,
Man's inhumanity to man
Makes countless thousands mourn!

"See yonder poor, o'erlabored wight,
So abject, mean and vile,
Who begs a brother of the earth
To give him leave to toil;
And see his lordly fellow-worm
The poor petition spurn,
Unmindful, 'though a weeping wife
And help less offspring mourn.

"If I'm designed you lording's slave --
By nature's law designed --
Why was a independent wish
E'er planted in my mind?
If not, why am I subject to
His cruelty and scorn?
Or why has man the will and power
To make his fellow mourn?

"Yet let not this too much, my son,
Disturb thy youthful breast:
This partial view of humankind
Is surely not the last!
The poor oppressed, yet honest man
Had never, sure, been born,
Had there not been some recompense
To comfort those that mourn!

"O death! the poor man's dearest friend,
The kindest and the best!
Welcome the hour my aged limbs
Are laid with thee at rest!
The great, the wealthy, fear thy blow,
From pomp and pleasure torn;
But, oh, a blest relief to those
That weary-laden mourn!"

See a Socialism Or Your Money Back  post on Burns here
By ajohnstone at January 25, 2013