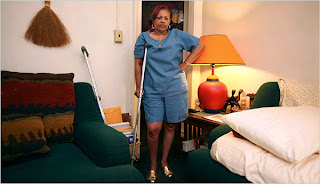 Carol Houlder, a substance abuse counselor, waited a year for surgery on her
injured ankle to be approved. “I was in so much pain and felt so hopeless for so
long,” she said.

"Dr. Hershel Samuels, an orthopaedic surgeon, put his hand on the worker’s back. “Mild spasm bilaterally,” he said softly. He pressed his fingers gingerly against the side of the man’s neck. “The left cervical is tender,” he said, “even to light palpation.” The worker, a driver for a plumbing company, told the doctor he had fallen, banging up his back, shoulder and ribs. He was seeking expanded workers’ compensation benefits because he no longer felt he could do his job. Dr. Samuels, an independent medical examiner in the state workers’ compensation system, seemed to agree. As he moved about a scuffed Brooklyn office last April, he called out test results indicative of an injured man. His words were captured on videotape. Yet the report Dr. Samuels later submitted to the New York State Workers’ Compensation Board cleared the driver for work and told a far different story: no back spasms, no tender neck. In fact, no recent injury at all. “If you did a truly pure report,” he said later in an interview, “you’d be out on your ears and the insurers wouldn’t pay for it. You have to give them what they want, or you’re in Florida. That’s the game, baby.” (New York Times, 31 March) RD
By egoutture at April 10, 2009