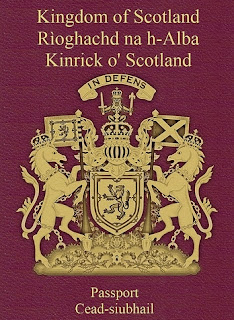 Nationalism and the referendum increasingly dominates Scottish politics and its newspapers. We now have the date of the referendum which will be the 18th September 2014when Scot voters will be asked the Yes/No question: "Should Scotland be an independent country?"


By re-drawing the map the nationalists promise economic prosperity. The unionists prophesise economic catastrophe. Socialists say experience shows that either way, the working class will lose out.

Independence is nothing but a dead-end. It doesn’t bring us closer to socialism, only farther away from it. Separation is no stepping stone to socialism, despite what phony “Marxist” theoreticians may say. It maintains and reinforces the divisions within the working class – a real boon for the capitalist class which do their best to keep us divided. The people on the Left who are pushing this option fall right into class collaboration. Under capitalism there is necessarily a division between rich and poor, a ruling class and the ruled, the class of capital and the class of wage-workers, and any attempt at uniting them must involve the acceptance of exploitation and oppression. It is glossed over with much talk of the shared culture. The experience of the poor living in a slum council estate is very different from that of the rich living in their country estates. Anyone on the Scottish Left who, therefore, combines the working class with the ruling class, calling on capitalist and worker to unite and fight for independence is not a Marxist or a socialist. Nationalism places the working class under the control of its ruling class and this means that socialism is abandoned. This process has been observed many times resulting in the the conclusion that national feeling is somehow stronger than socialism. The repeated triumph of national consciousness does not however prove that class consciousness is incapable of transcending national consciousness.

Those who say that the main enemy is the English ruling class mislead workers in Scotland into thinking we have less to fear from the Scottish capitalist class. But the truth of the matter is that Scotland’s capitalists have been an integral part of the British bourgeoisie ever since the Union, a union to advance the interests of the aristocratic land-owners and the developing merchant and capitalist class. The Scottish ruling class sold out the rights of the people in Scotland for a hare in the spoils of the Empire. Scottish capitalists, be they big or small, are not any less a part of the British bourgeoisie than English capitalists. Now they simply want a re-division of the pie by re-writing the constitution. Those who would subordinate the class struggle to the struggle for independence, those who counter-pose national unity to class unity, help keep capitalism alive. Independence divides the working class against the international bourgeoisie and it chains workers to the interests of “their” bourgeoisie. No-one seriously considers that the SSP or Sheridan’s Solidarity constitute in any sense an independent political force. They are, in effect, merely propagandists for the Scottish bourgeoisie and its chosen party, the SNP.

An independent parliament has no answers for the working class and would continue to be used by the millionaires and multi-nationals to control and rule.There are no common interests between workers and their exploiters, whatever flag is waved. Nationalism and class struggle are irreconcilably opposed. A nation is simply capitalism with all its exploitation and alienation, parcelled out in a single geographical unit. It doesn't matter whether the nation is 'small, 'colonial', 'semi-colonial' or 'non-imperialist'. In Scotland some businesses has found new roots, hoping to be effective in getting workers to sacrifice themselves for the false goal of “building the national economy” through independence from Whitehall. Multinational interests can just as much thrive on smaller centralised interdependent states, rather than through the old concept of the powerful nation. Separatism only reproduce the same problems on a smaller but no less savage scale.

All nationalisms are reactionary because they inevitably clash with class consciousness and poison it with chauvinism. Working class co-operation, especially in this global age of capital movement across all borders, is necessary for a real defence of our co-workers, neighbours and communities. Socialists have long maintained that people have the right to live, work and travel wherever they choose. As internationalists, socialists oppose national borders, which serve to divide and segregate people. It is important to remember that this view has always been central to the international labour movement from its very beginnings long ago. It is time for labour to remember this vital part of its history.

In the Scottish independence referendum there will be two different forms of nationalism on offer. The British nationalism of a “No” vote. The Scottish nationalism of a “Yes” vote. We will be advocating a third choice - a spoiled ballot with the words “world socialism” written on it. The Socialist Party is committed to destroying the capitalist system, the root cause of all oppression. It aims to unmask the irrationality of nationalism and work to show up the void that is national self-determination. Only by ending capitalism and building a democratic socialist future can we end the nightmare of war, environmental chaos, national and ethnic division, poverty and inequality that capitalism thrives on. The Socialist Party aspires to liberate all humanity, across the boundaries of national identity.
By ajohnstone at March 21, 2013