What do we mean by no leaders 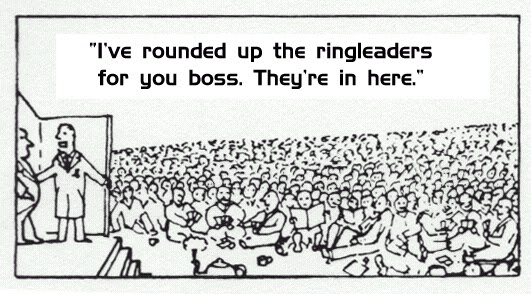 "Where are the leaders and what are their demands?" will be the question puzzled professional politicians and media pundits will be asking when the Revolution comes. They will find it inconceivable that a socialist movement could survive without an elite at the top. This view will be shared by some at the bottom. Lenin and his Bolshevik cohorts argued that we couldn't expect the masses to become effective revolutionaries spontaneously, all on their own. To achieve liberation they needed the guidance of a "vanguard party" comprised of an expert political leadership with a clear programme. The Trotskyist/Leninist Left may remix the song over and over again all they want but the tune remains the same: leaders and the cadres of the vanguard can find the answer; the mass movements of the people cannot liberate themselves. The case for leadership is simple. Most working-class people are too busy to have opinions or engage in political action. There’s a need for someone to dedicate their time and energies to adequately represent working class people. Instead, we what really need is professional, full-time advocates for our interests. It’s only logical that the Trotskyist vanguard, understanding better the decision making processes of power, represent organised resistance on our behalf. Ensuring we have a united position is more important at this stage and what does solidarity mean if not getting in line behind strong leadership - even if that leadership isn’t always sure what its principles are? Too many people don't have the right political consciousness, and if we let them use too much democracy they will make counter-revolutionary decisions that sabotage the revolution. The "masses" just can't be trusted is the clear conclusion. If the masses don’t have an evolved enough political consciousness to be pro-revolution, then would elect people as their representatives who reflect their backwards political views.  If the masses don’t have advanced enough political consciousness, this is going to sabotage the revolution one whether through counter-revolutionary decisions being made via direct democracy via electing counter-revolutionary leaders via representative democracy. This would be the point where the vanguard party strategy would suspend even representative democracy. They attempt to solve the problem of widespread backwards consciousness by implementing a one-party dictatorship with the “representatives” chosen from within the party rather than freely elected by the masses. If most people don’t have a sufficiently advanced political consciousness, the revolution will fail whether a vanguard party is used or not. And if a totalitarian vanguard party succeeds in stealing power from the not-revolutionary - enough masses, the revolution will still fail – because tyranny in itself is counter-revolutionary.

Socialism means that people have taken their destiny into their own hands. Socialism can't be created by decree or by force by a minority. It can only be implemented by the majority of the people taking over the economy (taking over their workplaces, streets and estates) and reorganising them as they see fit. But being against vanguards is not the same as being against organisation. A vanguard is a particular type of organisation, with specific aims and to reject vanguardism is not to reject organisation. The Socialist Party feels that if people were ever to enjoy a free, democratic, and equitable society, they'd have to build it themselves. From this point of view, so-called leaders should move from the driver's seat to the backseat and let the working class take the wheel. But the Socialist Party has not fallen for error of not having a firm vision of what we wish to achieve. History shows the dangers of failing to have a shared vision for system change and a well-organised political movement to back it up. Unstructured and unplanned efforts to implement the revolutionary alternative in the midst of social turbulence allows time and space for reactionary forces to step in to the vacuum of power. The Socialist Party also cautions against the temptation to build or to seek a blueprint, “The Big Plan.”

Because it is small many people disregard the healthy experience of the Socialist Party of Great Britain when it comes to being a politcal party without leaders. As a matter of political principle, the SPGB holds no secret meetings. All its meetings, including those of its executive committee, are open to the public (all EC minutes are available on the web as proof of our commitment to openness and democracy). In keeping with the tenet that working class emancipation necessarily excludes the role of political leadership, the SPGB is a leaderless political party, whose executive committee is solely for housekeeping and administrative duties and cannot determine policy or even submit resolutions to conference. All conference decisions have to be ratified by a referendum of the whole membership. The general secretary has no position of power or authority over any other member, being just a dogs-body, and despite some very charismatic writers and speakers in the past, no personality has held undue influence over the SPGB. The SPGB does not ask for power, but exists to educate the working class itself into taking it.

The Socialist Party of Great Britain argues that minorities cannot simply take control of movements and mould and wield them to their own ends. Without agreement about what it is and where it is going, leaders and led will invariably split off in different directions. We say that since we are capable, as workers, of understanding and wanting socialism, we cannot see any reason why our fellow workers cannot do likewise. The job of socialists in the here and now is to openly and honestly state the case rather than trying to wheedle and manoeuvre to win a supposed ‘influence’ that is more illusory than real.

The Socialist Party of Great Britain do not see ourselves as yet another leadership, but merely as an instrument of the working class. We function to help generalise their experience of the class struggle, to make a total critique of their condition and of its causes, and to develop the mass revolutionary consciousness necessary if society is to be totally transformed. We reject an organisational role. What we want people to come to is the realisation that they should take over their workplaces, communities, and put themselves in a position to control all of the decisions that affect them directly, and to run things themselves. If we were to be a vanguard, in the sense of an enlightened minority seeking to gain power over others, we could never achieve this aim, because WE would have the power, rather than people having power over their own lives, collectively and individually. We would also be assuming the arrogance to think we have a monopoly of truth, rather than certain views which we debate with others including amongst ourselves, coming to a better viewpoint at the end of it. There is a big difference between an organisation that produces propaganda and so on, and helps promote the popular will where people accept decisions because they have been convinced by the case and  have freely chosen to do so and a vanguard in the common sense of the word, meaning a party seeking to gain power over the masses. Revolution will be a process of self-education. Without the active participation of the mass of the working class in the fight for a communist/stateless society cannot even be contemplated.

We favour majority decision making in face-to-face assemblies and where and when necessary by fully accountable re-callable delegates. A representative is someone who makes decisions for the other people. A delegate, in contrast, carries out a mandate they have been given by the people who delegated them. In other words, they don't act as they think best, they act as they are told.  How could it not? The whole premise of democratic centralism is that a central authority dictates policy to everyone else, so no matter how democratically chosen it is it has to enforce its line and stifle dissent that makes this too difficult, which, in a revolutionary situation, there is bound to be a lot of. Democratic centralism would exclude you from participation. So whilst it pays lip service to the idea of the vanguard as the most conscious sector of the proletariat in practical terms, the real vanguard is the central committee.

Marx believed that, as the workers gained more experience of the class struggle and the workings of capitalism, it would become more consciously socialist and democratically organised by the workers themselves. The emergence of socialist understanding out of the experience of the workers could thus be said to be ‘spontaneous’ in the sense that it would require no intervention by people outside the working class to bring it about. Socialist propaganda and agitation would indeed be necessary, but would come to be carried out by workers themselves, whose socialist ideas would have been derived from an interpretation of their class experience of capitalism. The end result would be an independent movement of the socialist-minded and democratically organised working class aimed at winning control of political power in order to abolish capitalism. As Marx and Engels put it in the Communist manifesto, “The proletarian movement is the self-conscious, independent movement of the immense majority, in the interest of the immense majority.”

So when the television interviewers enquire who are your leaders, the answer will be that “we are all leaders” and when government ministers ask what are your demands, in the words of James Connolly we will reply “Our demands are most moderate. We only want the Earth.”

In the words of Eugene Debs
“I never had much faith in leaders. I am willing to be charged with almost anything, rather than to be charged with being a leader. I am suspicious of leaders, and especially of the intellectual variety. Give me the rank and file every day in the week. If you go to the city of Washington, and you examine the pages of the Congressional Directory, you will find that almost all of those corporation lawyers and cowardly politicians, members of Congress, and mis-representatives of the masses — you will find that almost all of them claim, in glowing terms, that they have risen from the ranks to places of eminence and distinction. I am very glad I cannot make that claim for myself. I would be ashamed to admit that I had risen from the ranks. When I rise it will be with the ranks, and not from the ranks.”

And another time Debs said:
“I am not a labor leader. I don’t want you to follow me or anyone else. If you are looking for a Moses to lead you out of the capitalist wilderness you will stay right where you are. I would not lead you into this promised land if I could, because if I could lead you in, someone else could lead you out.”