We have a world to win. 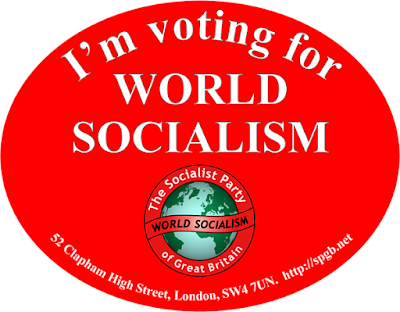 Indeed the contradictions of capitalism are many. The contradiction of a system of society whose fundamental contradiction is the ownership, by a small section of the community, of the wealth produced by the co-operative and associated effort of the overwhelming majority in that community. This fundamental contradiction, source of many secondary ones, will be solved by socialism, which removes the fundamental contradiction by the revolutionary replacement of the present system of society by a new social order, wherein the wealth produced by the freely associated efforts of the whole community is owned by the producers and distributed according to needs of the individual members of the community. In short— Socialism. The popular belief in the necessity of a monetary system to secure distribution is unfounded.  We do claim that convinced socialists when socialism has been achieved will behave like responsible members of society.

The world is full of manifestoes proposing to bring prosperity to this or that nation. None of them is worth the paper it is written on, for there can be no solutions to social problems on a national basis. Trade is international, banking and the money market cross the world, war policies involve multi-national gangs of murderers, such as the Warsaw Pact and NATO, communication technology has turned the world into a global village, the entire process of wealth production and distribution depends upon a complicated, worldwide division of labour. Anyone who proposes to examine the problems of society by concentrating upon just one nation is like a Professor of Anatomy whose study of the human body does not extend beyond the little finger on the left hand. That is why all parties of the world are wasting time in the futile pursuit of policies for national solutions: only the World Socialist Movement has recognised that capitalism is a world system requiring a worldwide solution.

Socialism is not a policy for running a nation. There has never been, and nor could there ever be, socialism in one country. Socialism has yet to be established, and when workers do decide to bring it about we shall do so as a worldwide transformation of society. In short, the struggle for world socialism requires a movement with a worldwide perspective. Nothing less than common possession of the world and all that is in it is worthy of our political effort as a class. To that end, we urge you to take your place as class-conscious workers within the World Socialist Movement.

In a socialist society all the resources of the earth, including the factories, mines, offices, land and the means of communication and transportation, will belong to everyone, regardless of colour, sex, age, or where one happens to live. All people will have free access to the goods and services which the world is able to produce. A socialist world will be free from the fetters of production for profit, the sole basis of creating goods and services will be the satisfaction of human needs. Without several nations competing to make the same product, without rival research institutes in different nations each trying to make a discovery without others knowing what they know, the world will be able to unite its energies for the first time ever. The waste, duplication, and tension of a society cut up into nations will give way to one world, one people and one common aim of mutual survival and comfort.

The abolition of nations will not mean that cultural variety will be destroyed. Indeed, it is nationalism which all too often suppresses minority cultures. In a socialist society, the richness of cultural customs will make the world a better place.