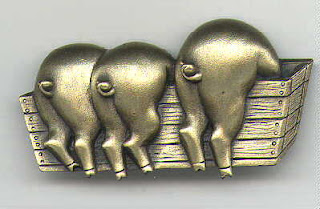 And its jobs for the boys ( and girls ) . Ex-attorney general , Lord Goldsmith , starts a lucrative new career with a big American law firm called Debevoise & Plimpton LLP on a salary thought to be in the region of £1 million a year. As European chair of litigation, Lord Goldsmith will be part of a firm that prides itself on conflict resolution and anti-corruption investigations - it recently acted for a company in connection with a worldwide inquiry into possible corrupt payments to government officials. Lord Goldsmith , of course , possesses plenty of experience upon how to handle corruption cases as witnessed by his handling of the Saudi Arabian - BAE arms and bribery investigation . Never let the law and legal nicieties interfere with politics and business .

Other pigs with snouts in the trough as reported by the Guardian are :-

· Alan Milburn - The former health secretary is an adviser to Pepsi which brings him £25,000 a year. He also holds a £30,000-a-year role on Lloyds pharmacy's health advisory panel and draws another £35,000 as an adviser to the European board of Bridgepoint Capital Ltd, a finance company with an interest in healthcare.
· Stephen Byers - The former transport and trade secretary is a paid consultant to a Lebanese construction firm based in Athens. He is chairs the board of the Yalta European Strategy group.
· David Blunkett - The former home secretary, collected £385,000 from his memoirs, and up to £150,000 a year from his weekly Sun column. He is also an adviser to Entrust, a company which is bidding to run Britain's controversial identity cards programme.
· John Prescott - The former deputy prime minister signed a £300,000 deal to tell his story in Prezza: Pulling No Punches after stepping down this year.
· John Reid - The former home secretary who was famously labelled Labour's "attack dog" by Jeremy Paxman is expected to become chairman of Celtic Football Club.
· Alastair Campbell - Downing Street's former communications director is reported to have earned £1 million for his book, The Blair Years: Extracts from the Alastair Campbell Diaries.