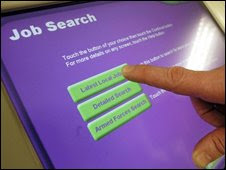 "For Andrew Baynham and his fellow workers at a car parts manufacturer in Hereford, the news was not completely unexpected. "There was a general feeling that it was coming for a while," he says. But it was still a bombshell when he heard recently that the factory where he spent the last 18 years may close. "There was shock when it was announced." If the gloomy forecasts of recent weeks are borne out, thousands of other people may find themselves in the same situation as Andrew. More and more people now fear the worst about their own jobs as the daily diet of bad news about the UK's faltering economy continues. One in ten workers think they could be made redundant in the next year, recent research from the TUC found, as job insecurity spreads. ...The process of corporate retrenchment is already under way with housebuilders such as Barratt Developments and Persimmon cutting thousands of jobs in response to the slump in home sales. Further job losses in the City seem inevitable as banks nurse huge credit losses while it is feared up to 40,000 jobs could go in the services sector with estate agents and retail staff worst hit. One member of the Bank of England's Monetary Policy Committee has warned that up to two million people could find themselves out of work by Christmas if economic trends continue."
(BBC News, 2 September) RD
By egoutture at September 04, 2008