BORN IN THE USA 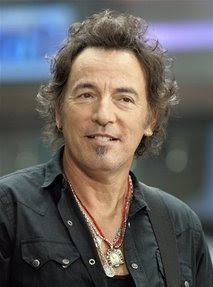 "Bruce Springsteen wants to make sure one bank remains solvent: the Community Food Bank of New Jersey. The singer will appear in a newspaper ad for the state's largest food bank that says: "We Can't Let This Bank Fail!" Springsteen has been a supporter of the food bank for 23 years, often donating proceeds from concerts or encouraging fans to bring food donations to his shows. This is the first time he's lent his image to the anti-hunger campaign. The Community Food Bank says the economy has resulted in a 30 percent increase in those needing food and could lead it to ration supplies for the first time in its 26-year history. The food bank assists charities serving a half-million people each year." (Yahoo News, 11 November) RD
By egoutture at November 16, 2008