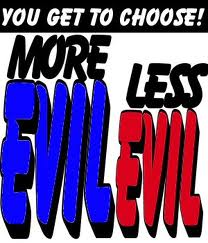 Labour Party members invariably assert (and it is a view endorsed by the left-wing) that if they were not in power the workers would be worse off. This theory of the “lesser of two evils” has always been the trump card in the hands of the Labour Party politician, but is it true that the British workers would have been worse off? The Labour Party makes out that it is saving the working class but what it actually attempts to do is to save capitalism. If any voter continues to hold a view that the Labour Party is a vehicle to achieve socialism then the ignorance being demonstrated is more than those who take a lesser-evils view, or those who take the view of a plague on all your houses. They have deceived themselves.


Millions will vote for the Labour Party, cynically encouraged by those on the Left. It is the nature of the faith, yet sadly the faith is not in the socialist intentions of the Labour Party. How many workers after these years of Labour’s “ socialism” have any idea of what real socialism is? But they choose the lesser of two evils, and sometimes the difference between the two evils is so small in their minds of the voters that they will choose because of the face or some irrelevant personal aspect of the party leader. It is this perception of politics being a choice between two evils, according to the rules of the game that we must constantly attack. The only way we can do this is by offering an alternative – so that they don’t need to play the game of voting for the lesser evil and don’t need to be forced into a false and hypocritical “choice”.

The working class needs only one party - a socialist party. The capitalists  require more than one party, because of their need to compete with each other. Different sectors and factions of capitalism seek to advance their own interests by competing both through and within these parties. Each party tries to mislead and cover up their sectional and vested interests with talk about “representing the people.” Their task is to fool the people with their lies and sound-bites. Because no matter what they say, no matter what they promise, no matter what the election manifesto states, they will try to carry out the capitalists’ agenda. Capitalists rarely take public office themselves. Instead, they prefer to rule indirectly, through trusted representatives. One of the most important ways they get leverage over the politicians is through campaign financing and contributions. He who pays the piper calls the tune. However, it would be a mistake to say that the wealthy class control “everything.” They do not control every politician, but nor do they need to. The main part of government they need to control is the leadership where the real power lies and they then can use it to influence the rest of government.

Adopting lesser-of-two-evils tactics spells disaster. Lesser-of-two-evil tactics inevitably lead to getting swallowed up and not to any expanded opportunity to speak for ourselves in the electoral arena. The problem is, there is always going to be a lesser evil among the pro-capitalist parties.
By ajohnstone at June 05, 2013