Capitalism is now being increasingly challenged.  Yet socialism has lost its position as the goal. The “socialist” parties now support capitalism but with a human face. The word "socialism" lacks a clear, concrete definition.  To enrich and strengthen anti-capitalism by giving it such a definitive objective, we need to envision a socialism that can inspire and motivate.

The ability to find paid work is rooted within supply and demand. If there is a demand for your labour, and few can supply it in the same way you do, you will do well. If many can supply it just like you, you may not do so well, but you may also manage to just get by if you’re lucky.  Without paid work, you suffer deprivation and misery. we cannot guarantee that everyone can always find jobs for the fulfilment of their basic needs. The Socialist Party proposes that can stop requiring the exchange of money for basic needs, making things like food, water, and shelter entirely free.  This would end the price system and make the requirement for money redundant. Work will be motivated not by money but by a planned economy for goods and services. Money itself loses meaning. The result is something more like an economy based on resources instead of money, where what is possible is measured by if we can physically achieve it instead of if we can “afford” it. Some may call this post-capitalist common ownership. Others may call it a Star Trek economy. Still, others may call it a resource-based economy. But it doesn’t really matter what we call it. Our critics argue that this would, in turn, destroy the ability to calculate just what to produce, how much of it produce, and where it’s needed. We say, that is not so and we can rationally determine planning by calculation-in-kind

No one person can claim 100% ownership of their wealth. It’s all fractions of the whole. As the saying goes, no one person can make a pencil. As simple a creation as that seems, it is the collective work of humanity. The wood comes from somewhere. The graphite comes from somewhere else. The eraser and what comprises it comes from elsewhere. Shipping networks transport raw materials that are made into component parts that are manufactured into a finished product that is shipped all over the world. More than that, no one alive thought of the pencil. That person is long dead. We all prosper because of knowledge from the past, passed down to us. This is our collective “something for nothing” we all enjoy on the one hand while deriding the idea of something for nothing on the other. Civilization itself is something for nothing. It is the result of billions of interdependent parts working together as part of a social system known as humanity.

Socialism is rule by the working people. They will decide how socialism is to work. This was how Marx and Engels defined socialism. The task of socialists, therefore, is to help and guide the transfer of power from capitalists to working people.  To use the word “socialism” for anything but working people’s power is to misuse the term. Nationalisation of mines, railways, steel, etc. is not socialism. Nationalisation is simply state capitalism, with no relation to socialism. Nor is the “welfare state” socialist.  “Welfare” in capitalism is to improve the efficiency of that state as a profit-maker, is not socialism but a form of state capitalism. It can be an improvement on capitalism with no welfare, just as a 40-hour week is an improvement on a 60-hour week. But it is not socialism. As capitalist crisis develops the “welfare state” also inevitably turns into the “means test state”.

Socialism is a type of society in which all the members of the community collectively determine their conditions of life and their way of living. In order to do so, they must own and control, collectively, the use to which machines, factories, raw materials – all the means of production – are put. Unless the means of production are effectively in the hands of the whole society, not as today where 1% of the population owns more than half the wealth of the world, there can be no question of the collective control of the conditions of life.

Every capitalist competes with every other one for a market. When they sell similar goods, their competition is obvious. Even when they sell altogether different goods, like TV sets and houses, they still compete for the limited wage-packet of the worker. If one capitalist does not compete, he is lost. To become big the Capitalist must first squeeze out his weaker competitors and add their capital to his – centralisation of capital – or make as much profit as possible from his current sales and reinvest it – accumulation of capital.


Never underestimate the unwillingness of someone to see the reality, if their lives depend on seeing a fantasy. 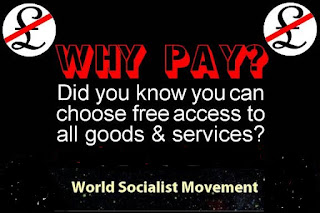