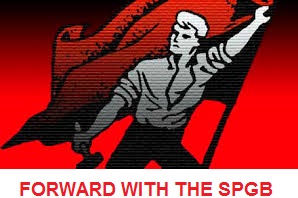 What sort of world awaits the working class in the future? Will it be a brand new world free from class privilege and wage-slavery; a world of social equality, security and happiness? Our message is the only message of hope in a world that appears to be on the verge of catastrophe.

The World Socialist Movement exists to achieve a society of communal ownership. The workers are a global class. At one level they may be in conflict — when they compete as individuals for scarce jobs, for example — but at the collective level of their class, their interests are in unity. Above nationalism, above any prejudice of race or sex, working people throughout the world must assert their essential unity in the work to overthrow capitalism and establish socialism in its place.  It will be a significant step on the way, when they cease to think in terms of national or regional solutions to world problems and begin to think globally. Does capitalism deserve to continue any longer? It brings toil, misery and desolation, in peace and in war, to the mass of the people. It is time those who bear the sufferings took time to think about how those sufferings could be abolished. The only way to do so is to destroy the source from which they flow—the private ownership of the means of production. Instead, we can co-operate to provide a good life for all while avoiding damage to the environment.

People in socialism will enjoy freedoms of decision-making and action that are denied to us under the capitalist system. With all people in harmony with their shared interests, the division of the world into rival capitalist states will be replaced by a democratic administration organised on a world, regional and local levels.

in the socialist world, there will be no boundaries to countries. The world will become a single unit. It will not be necessary for people to fight for food or a “standard of living,” or any of the thousand and one reasons given from time to time to various nations in order to gain the support of the people in a war. In the socialist world, the people will produce food and build houses for all. The natural wealth of the world is more than enough to amply satisfy the needs of all humans, be they Asian, African, American or European. There need be no shortages. The root cause of world poverty is to make sure that the “real world” continues to be one in which human beings needlessly die and the Earth is systematically ravaged in the name of profit.

We, socialists, stand for a society based on mutual aid and solidarity, the cooperation of all people worldwide on the basis of free decision-making and participatory democracy. We believe that others share our concern for the well-being of people in our society, and for the well-being of the planet itself. We are part of a long-established independent democratic movement which seeks by persuasion and worldwide peaceful political organisation to transform our present society into one fit for humankind.

The problems of our world cannot be solved within the existing structures of production and government. Our world is divided into national areas dominated by class minorities in each country. The ruling class and their political representatives, by reason of a combination of historical circumstances, governmental, military and ideological control or influence, are able to keep the majority of the world's population in subjection and subjugation. Socialism is a new world society where the means of production are commonly owned and where governments and systems of exchange, whether barter or money, have been replaced by democratic administration at local, regional and world levels: a society where there could be decentralized co-ordination of production with free access according to to need.  We want people not to be thinking in national terms but to consider the socialist proposition of a world community without frontiers.

Socialism cannot be established in one country. Even under capitalism, the Nation-State has become too small a framework for capital’s expansion. The World Socialist Movement does not defend national sovereignty or promote separatism. Our criticisms of capitalism are precisely that it has divided the world into competing nation-states whose conflicts mean trade wars and armed conflicts. Nationalism in one country begets its echo in others. What we want is not national independence but world socialism without frontiers.

War is completely unnecessary. We are living in a world that has enough resources to provide plenty for all, to eliminate world poverty, ignorance and disease, and to provide an adequate and comfortable life for everyone on the planet. Yet under capitalism resources are squandered on armaments, of individual as well as of mass destruction, and, as now, in actual war. Even in times of peace – as the armed truce between wars is called – capitalism's pursuit of profit pollutes and plunders the planet and upsets the balance of nature with potentially devastating consequences. The economic law “no profit, no production” applies implacably, resulting in millions dying of hunger and related diseases every year simply because it is not profitable to produce the food to feed them and, in fact, often while the food that could feed them is destroyed so as to maintain prices and profits.

The World Socialist Movement opposes war and capitalism which breeds it:

· We extend the hand of friendship to our fellow workers who our political masters have designated as targets for destruction.

· We pledge to do all within our means to bring the slaughter to an immediate end.

· We pledge ourselves to continue to work for the establishment of a world socialist society of peace and cooperation.

· We call upon fellow workers everywhere to join in the struggle for World Socialism.

One World, One People, For World Socialism!