Which Way Forward For The Unions? 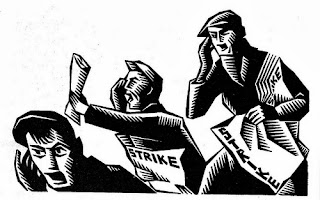 In every country capitalism has produced a highly developed trade union movement. Workers have struggled to build trade unions and long before there was a political party of the workers there were trade unions. Their history is a record of  workers who fought the laws which prohibited the existence of the unions, who dared imprisonment, deportation, victimisation and persecution in order that their unions could become strong and powerful. One generation succeeded another in continuous effort, in great strikes, massive demonstrations, political struggles, until to-day millions of workers are organised in trade unions.

Have you ever stopped to ask why and for what these organisations have been built? Trade unions were not formed to fight for socialism. They defend the wages and conditions of the workers, their wages, their hours of labour and so on. This is clearly revealed by the way in which the trade unions have grown.

Labour  is a commodity and those who sell their labour power, the members of the working class, manual and brain-worker alike, also compete like other commodities. Unions represent in one sense an attempt to organise monopolies of labour power in order to break down the competition between the workers who in the labour market are commodities for sale and to establish monopoly prices for labour.

The more trade unionism advances in this direction the more difficult it becomes for the capitalists to make profit. Hence the everlasting cry of the capitalists for “lower production costs” and its opposite the workers’ struggle for higher wages and improved conditions. Unions are the movement of wage-workers. All its problems are based upon the fact that the members of the unions are wage-workers who, to live, must sell their labour power to the owners of the means of production.

They are parts of a competitive system, the motive of which is that of production for profit. The labour it uses is a commodity subject to all the laws of commodity production. The fundamental purpose of the trade unions, therefore, must be the pursuit of the interests of the wage-workers.  The unions regulate wages, hours of labour, etc., by means of collective agreements with the employers. In some industries, where the workers are well organized, the unions have agreements covering the employment of labour, the regulation of overtime, protective safety regulations, etc.

Unions have many agreements governing allocations of work schedules, decasualization schemes for workers, etc. Probably the largest field of influence is that of the unwritten rules and customs. These extend in many directions, such as the distribution of work, overtime regulations, starting and stopping times for meals, the introduction of new machinery, the transfer of labour, limitations and training of apprentices, etc.

During the last few years the trade union movement has experienced changes of the most deep-going nature which have affected vitally its whole structure and altered its outlook in many important respects.

The trade union movement is conditioned in its development by the economic and political framework within which it exists. The problems of the trade union movement can never be separated or isolated from the general political situation. Its internal dynamics do not operate independently of these conditions. The  working class as a whole is not yet politically conscious. It does not yet act as an independent class. It goes without saying that reformist illusions among the masses have been developed.

Nevertheless, workers have demonstrated a remarkable tenacity in clinging to their unions. Whatever may happen to this or that union or any number of unions, the workers do not wish to abandon the union movement but to broaden it, increase its militancy, etc. So long as capitalism endures, organisation of some kind on the job to deal with the boss is indispensable.

Generally speaking, we cannot conceive of an advance of the working class to a point where it can enter upon a struggle for power, without an advance in the economic organisations in the direction of industrial unionism. The unions have become repositories of an immense amount of information about the operations of industry – technical, engineering, administrative, etc.

This also makes them exceedingly important agencies in the process by which the control of the workers over industrial operations is made actual. Workers possess an  organisation, through which they have been accustomed to carry on their struggles, would make use of this  ready-made machinery for communication. Is it not likely that the unions as a whole will become the workers’ councils, the instruments of workers’ power?

Theoretically this possibility cannot be excluded.  It is also save to say that they may not be ready or entirely fitted to conduct the process of administration of production. The union organisation is after all primarily sectional, representing the interests of its own members and may not be  equipped to deal with the larger  issues.

The labour movement currently lacks social vision. It has not yet raised the inspiring banner of working class emancipation. It is still timidly and blindly trying to patch up wage slavery and make it endurable. It has still to learn that the only solution of the labour struggle is by the abolition of capitalism. It is time for all workers to look upon capitalism as an obsolete social system which must be eliminated and look forward to the establishment of a new society in which parasitical capitalists will be no more.