The Socialist Party is the political expression of the interests of the workers in this country.  For the existing ills of the wage-workers there is but one remedy. It is embraced in a single word — socialism — the common ownership of all the means of production and distribution; and these can be secured by conquering the political power and seizing the reins of government through a united, class-conscious socialist ballot. To the working class we say, the Socialist Party is pledged to your complete emancipation. It promises no shortcuts and no quack remedies. It is a class-conscious, revolutionary party committed to the overthrow of capitalism and its wage-slavery and the establishment of the cooperative commonwealth and economic equality, and every wage-worker should rally to its standard and hasten the day of its triumph and their own deliverance. The Industrial Revolution created the two inherently adversarial key components of modern capitalism engaged in a monumental battle — the capitalist class and the working class in formation. A united socialist movement may now make clear to all the people the lines of conflict between capitalism and socialism; between despotism and liberty. These lines of conflict may be made so deﬁnite that no party of compromise or tinkering can enter the political ﬁeld. Nothing outside of socialism can defeat capitalism. Socialism points out the economic basis upon which democracy must stand in order to achieve liberty. It proclaims all liberty to rest back upon economic liberty, and all individuality to be rooted in economic unity. It afﬁrms that there can be no liberty save through association and a cooperative commonwealth. It makes clear that democracy in the State is but a ﬁction, unless it be realised through democracy in production and distribution. Socialism declares that liberty to be a mockery if it means merely the survival of the strong and the cunning devouring the weak. If we are to stand together, we must act like brothers and sisters. Not until slave and master have both disappeared can we lay any proper claim to civilisation.


We do not denounce capitalists as individuals. Men and women are the product of conditions, circumstances, environments, and these are favourable or unfavourable, become useful or useless, noble or ignoble, good or bad. It is, therefore, not with the individual that we have an issue with, but with the system of society that produces him and protects him. The Socialist Party’s purpose is to discuss conditions and point out the means to our fellow-workers who maintain that there can be no relief while any part of the wage system remains, insisting that the present competitive system must be completely overthrown and not a vestige of it left before permanent relief to the suffering masses can be provided. Socialism is the science of human association.


The economic basis of present-day society is the private ownership and control of socially necessary means of production, and the exploitation of the workers, who operate these means of production for the proﬁt of those who own them. The capitalist system of production, under which we live, is the production of commodities for profit instead of for use for the private gain of those who own and control the tools and means of production and distribution. Out of this system of production and sale for profit spring all the evils, and problems of misery, want, and poverty that menace and confronts civilisation. The Socialist Party teaches that the only way to attain the just distribution of wealth to those who produce it is through the common ownership, democratic control and operation of the means of production and distribution, such as lands, mines, factories, transport, communications, etc., etc. It asserts that this production should be for use and not for sale or profit, thus doing away with all private ownership of the means of subsistence in every sphere of society, and with which a vast amount of unproductive labour and an immense number of useless and harmful occupations wastes resources. Socialism would conserve and not abolish the private ownership of wealth as distinguished from capital. Thus, homes and all personal belongings not used to produce more wealth would be individually and not collectively owned.


It is the interest of the capitalist class to maintain the present system and to obtain for themselves the largest possible share of the product of labour. It is the interest of the working class to improve their conditions of life and get the largest possible share of their own product so long as the present system prevails. Each class strives to advance its own interests as against the other. It is what we describe as the class struggle. The capitalists, by controlling the political parties and in control of the State secures and entrenches its position. Without such control of the State its position of economic power would be untenable. The workers must wrest the control of the government machinery from the hands of the masters and use its powers in the building of the cooperative commonwealth. The Socialist Party seeks to organise the working class for independent action on the political ﬁeld, not just for the betterment of their conditions, but above all to end the class rule of out exploiters. Such political action is absolutely necessary to the emancipation of the working class. To accomplish this aim of the Socialist Party is to bring about the common ownership and democratic control of all the necessary means of production — to eliminate proﬁt, rent, and interest, and make it impossible for any to share the product without sharing the burden of labour — to change our class society into a society of equals, in which the interest of one will be the interest of all. Subordinate to this fundamental aim, it supports every measure which betters the conditions of the working class, and which increases the ﬁghting power of that class within the present system. 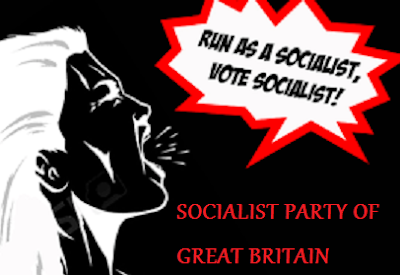