When you own everything, you fear everyone 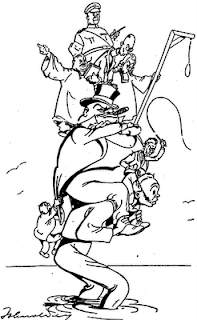 We are living – let us frankly admit – in the aftermath of great defeats suffered by the labour movement internationally. The working class remains in many countries atomised, disrupted, disoriented. Everybody knows that this capitalist system we live under is crazy. We have the factories and raw material that can produce a world of plenty. We have the willing hands and brains to do the job. All we have to do is let the one work on the other, and distribute what is produced. Sure, the factories and machines and raw materials are here. Sure, the labor is there to turn them into usable goods. But labour doesn’t own the factories and machines. It has nothing to say about whether they’ll be used and for what. These factories and machines are owned by a small handful of capitalists, and these fat cats won’t let a wheel turn unless they can make a profit. That profit comes out of the wealth which labour produces. It comes out of their purchasing power.


Capitalist (A), seeking profit (B), owns a factory (C), and starts producing. Does he produce anything? He’s not a fool. He hires workers (D) to do the actual producing. They produce a billion pounds worth of goods (E) and get their wages (F). How much do they get – a billion dollars in wages, for producing a billion dollars in goods? Don’t be silly. The capitalist has to get his profit (G). So, they get only – say – a half billion in wages, the rest is profit. Pretty soon, the profit piles up in the coffers, and the unsold goods pile up on the shelves (H). Capitalists stop making more goods, lay off. Hey Presto – unemployment. The National Association of Manufacturers (K) says: What’s needed is more profit to spur production. The best way to raise profits is to cut wages. Wages are cut and more profits made. The capitalists and their government are saying that they must have their profits above all other things, and that in order to get them the wages of workers must be kept low.


That means WE have to own and control the factories and machines we work on – WE, LABOUR, organized collectively.


Abolish the capitalist profit.  Take over our economic world, organise it democratically through a. Produce to the full. The sky’s the limit as science can provide, produce enough to give plenty for all. And distribute what we produce for the use of the masses of people.


Common ownership of our economic machinery – that’s socialism. The world has a capacity to produce beyond the wildest dreams of most people. This capacity is used primarily to produce the means of death and destruction. The factories are there and if need be more can be built. The raw materials and resources are available. The working force is here. Now what stands in the way of full production, full employment and the fullest enjoyment of the fruits of our labour? Only the insatiable lust for profit of the capitalist class. Only the unplanned anarchyof capitalist production. In the midst of unparalleled opportunities to achieve plenty for all, millions are unemployed, in poverty and suffer hunger.


LABOUR, RELY ON YOUR OWN STRENGTH IN ORDER TO ACHIEVE YOUR OWN AIMS. Wherever the people have had the opportunity or the freedom to act, they have shown their desire for a new world. They want a world free of war, free of inequality, free of want. They want a world free of the rule of the few over the many. To accomplish this task, it is only necessary to understand what our task is and to realize our invincible strength. Then no power on earth can withstand us.  The working class is losing confidence in capitalism and the spokesmen for “free enterprise.” That is a most encouraging sign.


The Socialist Party greets its comrades and brothers and sisters of the working class of this country and throughout the world. We are the party of revolutionary socialism. We have no interests separate from the interests of the whole working class. The working class is on the march. It is taking the first big steps out of capitalist decay, capitalist disorganisation, capitalist bankruptcy, capitalist barbarism. It is rising as the reorganiser of society. It cannot achieve this goal, accomplish this task, without the victory of socialism. They need the knowledge of their own strength to enable them to construct a better world – a world free from hunger, unemployment, war and environmental destruction. It is solely by the independent action of working people, those who produce the wealth of society, that capitalist power and privilege can be eliminated and a world of peace and plenty for all be built.


As a socialist party devoted to the abolition of the capitalist system of profit and exploitation of the people, the Socialist Party defends the interests of oppressed people the world over, showing how these interests were common to all who labour. The Socialist Party will continue its great aim: to seek the abolition of the rotten system of capitalist exploitation, of wealth concentrated in the hands of a few and poverty for the millions, of mansions for a handful of rich and hovels for the people, of fine foods and delicacies for a handful and hunger for the mass of people, of security for the rich and insecurity for those who work in, order to live. It will fight for a socialist society of plenty for all. The struggle between capital and labour must not result in a “socialist” label pasted over the same old capitalist system. We believe that the basic problem of our time resides in society. We believe that humanity can develop a healthy society of plenty and peace. As socialists we continue to affirm the possibility and necessity for men and women to work together to build a new and decent society, and that means primarily the class which has most to gain from and can alone construct socialism: the working class. Capitalism is at a loss to reconstruct the world, it cannot achieve the most simple reorganization of production and distribution. Capitalist society is sick, moribund, overripe for change.


Do you want economic plenty, the utilisation of the means of production for peaceful needs? Then you must fight for socialism. Do you want a future without nuclear weapons, without poison gas, without terrorist bombing? Then you must fight for socialism. here is no other road. Either chaos and destruction – or socialist reconstruction. The socialist perspective is more valid, more essential than ever because it alone meets the problems of our times; it alone proposes a programme that is realisable in the situation of declining capitalism and which is a comprehensive solution to all of our social problems, as well as a concretisation of the greatest ideals of which humanity is capable. We stand with arms interlocked with our comrades throughout the world; we march towards the socialist future. Yet we must ask our fellow-workers this question. How is possible that millions of working people still believe and support an economic system which does not benefit anyone of them?