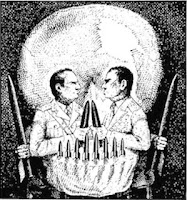 Socialism is where wealth is produced not for money-sale but for the direct satisfaction of the ascertained needs of the whole co-operating community of owning-workers involves a complete change in every detail of social life. In its struggle against the workers’ emancipation movement, capitalism plays upon all the dark sentiments of ignorance, prejudice and superstition. This is seen daily and hourly in its endeavours to divide the workers and oppressed people along national, racial and religious lines. We partisans of world socialism retain undimmed that vision of the future and hastens its realisation.

We begin from these fundamental propositions:

1. Modern wars are part and parcel of the capitalist system.

2. Capitalist economy must continually expand or suffer from recession

3. Each capitalist represented by the nation is continually driven to seek new markets, new sources of raw materials and new areas for investment.

4. Important trade routes must be protected

5. There can be no end to war without an end to capitalism.

All are familiar with the more superficial and immediate causes of the war. Previous wars and the terms of settlement which created lasting hatreds and thoughts of revenge;the remnants of a feudal system with its royal dynasties which retarded modern social and political progress with racial and religious prejudices. The supreme duty of the hour is for us, the socialists of all the world is to dedicate ourselves anew to the imperishable principles of international socialism; to strengthen the bonds of working class solidarity.The Socialist Party extend to the socialists of all the world our greetings and hail them all our brothers and sisters, our comrades.We socialists are for the goal of a world administration, which would eliminate the obsolete national boundaries into which the earth is divided. The national boundaries are obsolete not only because they breed fear; they are obsolete because they choke and distort the inevitable need for political integration in a world where economic integration is already a fact in various ways. The peoples of the world in the various countries, through coordinated international effort, will  progress toward the complete class-free socialist society, all the various workers' organizations which have been instruments and mechanisms of class struggle, that is, the socialist parties, the unions, the cooperatives, the workers’ councils, will gradually lose their original functions and coalesce into one united body. And that one united body will be the organised world society of the free and equal. World socialism shall really be the human race. 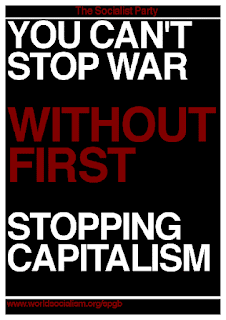