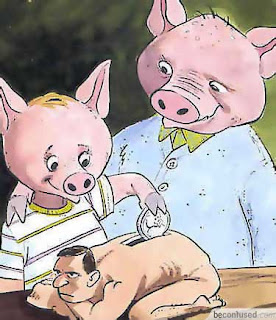 Elsewhere and if committed by others this would be classed as fraud and the perpetrators would be hounded but with such influence and clout with the State the banking industry can do no wrong under the eyes of the Law , it seems .

Britain's high street banks have raised billions of pounds in funds through complex financial deals that use supposedly charitable trusts which are not donating a penny to good causes . Trusts are set up during an elaborate process known as securitisation, which has increasingly replaced the traditional mortgage model in which banks made loans to home buyers and held on to the loans until they were paid off.
Over the last seven years, banks have been pooling many of their loans and turning them into mortgage-backed securities which can then be sold to large investors.
The banks have been doing this through trusts which they can control without owning, isolating financial risks, and keeping their liabilities off their balance sheets in a way that makes them appear more profitable. By giving the trusts a charitable status, they can be operated indefinitely. The trusts are not obliged to make any payments unless they are eventually wound up, and even then the amount any charity might receive would be only a small fraction of the sums raised.

Of the 12 institutions investigated by the Guardian, all admitted that their current series of "charitable" trusts had given nothing to charity.

Halifax names the National Society for the Prevention of Cruelty to Children (NSPCC) as a beneficiary, and has since raised funds on the back of almost £50bn of home loans. The Halifax admitted that this trust had not paid a penny to the NSPCC, however, and the charity said it knew nothing about the arrangement.

Northern Rock had raised £71bn through a Jersey-registered trust called Granite, which issued a prospectus that told potential investors: "Any profits ... will be paid for the benefit of the Down's Syndrome North East Association (UK) and for other charitable purposes."
Down's Syndrome North East, a small charity run by volunteers from a semi-detached house on the outskirts of Newcastle, was told nothing about this and did not receive any money.

Standard Life's trust, named Lothian, says it operates "for the benefit of charities involved in the domestic and international wellbeing of children". Standard Life would not identify these charities, but acknowledged that it had not paid them any money.

The Alliance and Leicester, for example, said it was one of the last UK banks to enter the mortgage securitisation market, and protested it had merely copied its competitors. "When entering the market, we took legal advice and followed a well-established structure already in use by very many other UK banks," a spokeswoman said. What an excuse but that's capitalism -- no scruples at all in the hunt for profits and always ready to join others with their snouts in the trough .
By ajohnstone at December 05, 2007