What is this thing with nationhood? 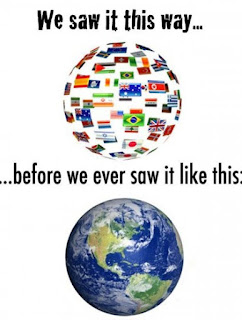 The capitalist class flood the air waves with illusory phrases such as, “national economic interest,” “national security,” “national unity,” “national competitiveness.” We are told that we all rise or fall together — as one nation and one people.

One of the key areas for nationalist talk is the economy. Patriotic voters are urged to ignore class divisions, shun unions, and join the bankers and bosses, sacrificing their own worker interests for the “good of the nation.” But let’s get real. Cuts, austerity measures, and wage freezes benefit only the rich, not the whole country. The capitalist economy can never work for all of us, because it’s designed for the wealthy, who relentlessly endeavour to widen the gap between rich and poor.

When nationalists campaign to “Buy British" or "Save Scots Jobs", they are really pitting British or Scottish workers against their class allies in other countries. These nationalist campaigns enrich the very companies that outsourced and caused job losses in the first place in order to exploit cheap labour. We should realize that the goal is definitely not protecting British or Scottish jobs. Good Lord no. Real job security would lead to less "freedom” for capital and produce a more demanding working class. Rather, the "Buy British/Scottish" is nothing more than a domestic instrument of foreign policy directed against another economic power.

Some union leaders fan the flames of nationalism to hide the fact that they are not willing to fight against layoffs and wage cuts. It’s their way of diverting workers’ anger toward other countries’ labourers and away from the real cause of the economic crisis — the profit system. Working people can improve their conditions by uniting with the mates across borders, instead of swallowing patriotic slogans against their own class interests.

Increased productivity’ is really code for speedup, downsizing, and pay cuts! To be patriotic, workers are told they must nobly sacrifice to save the economy and the nation. Bullshit. “Shared sacrifice” means accepting new contracts with reduced pensions and not rocking the boat with protests and strikes — all for the good of “our” national economy! Doesn’t that sound much better than sacrificing our working conditions for the dividends of "their" shareholders?

Workers in Scotland have much more in common with exploited workers in India and the protesters against austerity in Greece and Spain than with local tartan lairds.

The rich, like the multinationals that they own, owe allegiance to no flags. They have the best of everything money can buy, and they can jet to wherever in the world they want to get it. They all think that it is in our interest that they remain as powerful as they are. They have the money, but they also want us to love them. They’ve developed an entire theory to explain this – the theory of the wealth creation and they’re surrounded by people who agree with them all the time, politiciians and intellectuals dedicated to this. They act and think like the transnational citizens they are. They help one another out, (as far as they can without harming themselves in the process) because they all want the same thing: ownership and control of everything. 50 leading private banks alone collectively managed more than $12.1 trillion in cross-border invested assets for private clients. Less than 100,000 people worldwide own about $9.8 trillion of the wealth held offshore. A global super-rich elite had at least $21 trillion hidden in secret tax havens by the end of 2010. The figure is equivalent to the size of the US and Japanese economies combined.

Nationalism was initially an instrument of revolution against feudalism. In the face of disappointment with the failure of “nationalism” to improve their lot in life, there was a moment in time, when the working class began to think internationally. Socialism, syndicalism and anarchism reached around the globe. The First and Second Internationals were established. The Industrial Workers of the World was founded. However, too often tempted by a few pennies more in wages over here, working men abandoned  fellow workers over there. Finally, in the face of the “patriotic” onslaughts and the slaughter of the First and Second World Wars, the internationalist movements almost completely dissolved.

The capitalist class use the old rule of divide and conquer, polished and updated for modern times. Nationalism as a crude control device. The borders that allegedly protect us from illegal aliens are the borders of our own prisons. They are borders of the mind as well as geography. Marxism is about uniting workers of the world in their common interest against capitalism. Racism and xenophobia and nationalism and patriotism and every other tactic of division have been promoted relentlessly by capitalism. Nationalism is used to propagandize and manipulate the masses of people against their better interests. Our unity is this system’s  Achilles’ heel. Only a working class with a consciousness of itself and united across all racial, national and cultural boundaries is capable of emancipating themselves.

Put your class first, not your country. The world is a “global village”. Each region may have its own particular and distinct customs, but they are part of a greater system of society that is world-wide. This system of society is capitalism and every region and nation operates within this system of society in one way or another. Socialism is not a cooperative island in the middle of capitalism, but a global system of society that will replace capitalism. One country cannot establish socialism. No country is completely self-sufficient in the resources people need to satisfy their needs. No country can really isolate itself from the rest of the world in a peaceful manner, so a peaceful “socialist nation” would be easy prey for the outside capitalist world. Just as capitalism is a world system, socialism will have to be a world system. Socialism will be a world without countries. Borders are just artificial barriers that belong to a past and present that is best left behind.

We can only save the planet by establishing a society without private or state owned property, where humans will be freed from the uncontrollable economic laws of the pursuit of profit and the accumulation of capital. Only a world socialist society, based on the common ownership and democratic control of natural resources, is compatible with production that respects the natural environment. Humans are capable of integrating themselves into a stable ecosystem and there is nothing whatsoever that prevents this being possible today on the basis of industrial technology and methods of production, all the more so, that renewable energies exist (wind, solar, tidal, geothermal and whatever) but, for the capitalists, these are a “cost” which penalises them in face of international competition. No agreement to limit the activities of the multinationals in their relentless quest for profits is possible. Measures in favour of the environment come up against the interests of enterprises and their shareholders because by increasing costs they decrease profits. No independent Scotland is going to implement legislation which would penalise the competitiveness of its national enterprises in the face of foreign competition.