Now is the time for Revolution 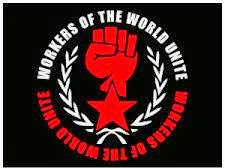 People want answers. More than ever before, people are questioning the ability of the capitalist system to provide even the most basic necessities of life. The question being asked by more and more is “Where am I going to find work?” or “How long is this job going to last?” The working class of the world have many problems, struggles and tasks in common. The ruling classes are stealing our labour power and robbing us of the fruits of our labour.

People increasingly realise that their children won’t live as well (and even in some cases, for as long) as they have. That part of the capitalist dream is gone forever. College education, the road out of the working class, is no longer the route to upward mobility. Today there is a whole stratum of jobless who will be permanently unemployed and who will never hold a productive job under capitalism. If they find another job it will not be comparable in pay, conditions or stability. While the capitalist system has created more long-term unemployment and driving more and more workers into its ranks, the capitalists are ruthlessly cutting off the benefits that sustain them. Under the guise of welfare reform and “getting the scroungers back to work ” the government departments are pruning people from eligibility. The implication is clear, jobless workers have to face the possibility of watching their families go hungry. Capitalism tears at and destroys the social fabric in which we live. The deepest and most extensive economic crisis is changing the very lives we lead, how we think and how we act.

In the process of capital accumulation by the capitalists, wealth is constantly accumulated at one end and poverty is accumulated at the other. “This is an absolute and general law of capitalist accumulation.” Marx said. The capitalist are taking bigger and bigger slices of the pie and workers were left to divide up a shrinking percentage of it. The illusory prosperity of the was built on a foundation of sand with the tremendous growth of consumer credit of all kinds. While giving the American people the illusion of owning their house and car, in reality it represented growing absolute impoverishment as debt mounted on debt. The capitalists cannot allow the credit boom to continue. Debt accelerates far ahead of the ability to repay it, leading toward a financial crisis. Since the banks and other creditors have also borrowed heavily to expand their lending and stimulate the economy, when they do not get paid a chain of defaults can ensue. Thus a credit squeeze brought the financial system to the brink of collapse. The consequences changed not only people’s lives, but the dreams they had for their children’s future. To list its effects on our lives is indeed to catalogue the living hell that is capitalism today.

The working class will never be able to launch a determined struggle for the overthrow of capitalism, and to establish a new, socialist society, without participating in all the important protest movements in society at large, i.e., outside the work places, opposing militarism and war, sexism and racism, police-state surveillance, pollution and waste, etc. all produce huge reservoirs of resentment and bitterness among the workers. The socialist revolution itself will be the outcome of the combination of all those important streams of discontent of all the oppressed: their merger into a raging torrent, a tidal wave of opposition.

Clearly, of course, the key question is not simply workers' participation, but precisely what kind of participation. Large-scale participation of the workers, not only just as marchers on demonstrations but organised as a class that is putting forward its own conscious revolutionary goals. Every new wave of workers and activists has to learn the lessons of struggle in their own way. But the work can go faster or slower. Without education and knowledge, the movement of the future will be left to the agony of learning everything from scratch, and it will suffer the pain of having to repeat again and again all sorts of avoidable mistakes. It will inherit nothing from the past but a mass of mistakes. Socialists want the working class to struggle and organise whereas the reformist Left don't want the working class to have its own voice, for this would spell the beginning of the end for them. They seek to keep the workers politically enslaved. They don't want truly mass working class participation in the political movement, because the workers would tend to go out of their control.

The struggle in which we are engaged today is a struggle of classes. The supremacy is now held by the capitalist class, who control the powers of government. The principle of all existing governments is continuity of the status quo. In this there is absolutely no difference between the parties. Continuity means the continuance of capitalism and of the traditional policy of capitalism in its essential features, notwithstanding minor modifications of detail.  Parties but express in political terms the economic interests of those who compose them. There is no fundamental difference between the Labour and Tory parties. Their principles are identical. They are both capitalist parties and both stand for the capitalist system, and such differences as there are between them involve no principle. These are the same, a capitalist party, by whatever name it may be known.Both reek with corruption in their servility to the capitalist class, and both are torn asunder in the mad scramble for the spoils of office. These parties have been in power all these years, why have they not ever fulfilled their platform pledges? These parties already have had the power to make good their promises. How many more years of power do they require to demonstrate that they are the parties of the capitalist class and that they never intend to legislate in the interest of the working class, or provide relief for the suffering people. Their policy speeches are filled with empty platitudes and meaningless phrases but they are discreetly silent about every vital question which is worthy of consideration by any intelligent person. They are without principles and without ideals.

The Socialist Party is the only party which honestly represents the interests of the working class.  It stands for the absolute overthrow of the existing capitalist system and for the reorganisation of society into an industrial and social democracy. The Socialist Party is the party of human emancipation, standing for a world-wide democracy, for the freedom of every man, woman and child, and for the welfare of the planet.

The Socialist Party is party of which the elected spokes-persons will remain the servants – not become the masters. People don’t want politicians impressed by the rigmarole of parliamentary procedure or awe-struck by the medieval pomp and pageantry to way-lay the unwary. We need men and women who will not waste time and energy chasing after the unattainable mirage of reforming capitalism out of existence or in trying to “make it work better.”  We need delegates who will use their position to challenge the fundamental social, economic and political basis of capitalist society and expose the condition of hunger, misery and war that are bred by it – one who will advance the fight for socialism. Our goal is socialism – everything we propose or do will be in the direction of that objective.

The abolition of the state is no empty slogan. It is an integral part of the social revolution. All socialists understand that once the aim of the proletarian movement, the abolition of classes, has been achieved, the state  disappears and its governmental functions are transformed into simple administrative functions, losing its political character, that is, its repressive and coercive elements, and becoming the administration of things, watching over the true interests of society.

Armed struggle is no answer. Not only would armed insurrection provoke a military response a hundred times more violent, it would also give the ruling class of this country the pretext and opportunity to drop the mask of democracy and adopt on the political field the despotism that prevails in capitalist industry. Armed insurrection is an open invitation to an authoritarian dictatorship.

A revolution means a complete change, and it need not be accompanied by violence. For a successful revolution there most be a constructive phase when new institutions are established to replace those that are dismantled. In an age of great technological and economic complexity such as the present one, when prolonged economic paralysis can have devastating consequences to great masses of people, especially to the masses crowded into the great urban centers, this constructive phase of the revolution must be carefully planned and prepared for.

A great social historian, Henry Thomas Buckle, has succinctly summed up the difference between insurrection and revolution. "Insurrections," he wrote over a 100 years ago, "are generally wrong; revolutions are always right. An insurrection is too often the mad and passionate effort of ignorant persons who are impatient under some immediate injury, and never stop to investigate its remote and general causes. But a revolution ... is a splendid and imposing spectacle, because to the moral quality of indignation produced by the presence of evil, it adds the intellectual qualities of foresight and combination; and uniting in the same act some of the highest properties of our nature it achieves a double purpose, not only punishing the oppressor but also relieving the oppressed."

With all the sympathy that it is possible for a humane mankind to summon for the suffering, anguish and despair of the victims of capitalism, with enlightened understanding of their anger and bitterness and complete agreement that their anger and bitterness are justified, the Socialist Party nevertheless urges all who are inclined to listen to the advocates of violence to reflect, and to reflect soberly. No one should doubt that such a nationwide insurrection as often proposed by political opportunists and adventurers would cause enormous damage and bloodshed.
By ajohnstone at August 01, 2014