We need change - We need Revolution 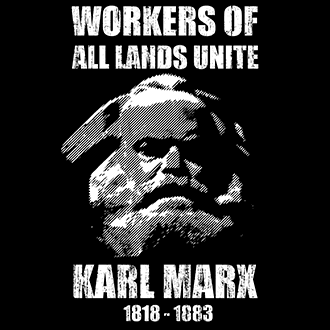 The Socialist Courier blog has written much about the anarchy of production. Not only once but numerous times, we pointed out that millions are not doing any useful or lasting work for society. If instead they would have the opportunity to do useful work by participating in producing beneficial things it would change the picture of our society a great deal. We have highlighted how, purely for the sake of profit, necessary products are made from shoddy materials. How the interests of the capitalists is to make sure that these products wear out quickly, so that they will then need to be replaced, as this will ensure the most profit for them. We have showed that just because of competition how much unnecessary work and wasted energy this means at a cost to the environment. The capitalist system has run its course. The world bandits of capitalism have ravaged the Earth and are squabbling over the spoils.

The World’s marvelous machinery, its complex technology are not for the welfare of the many nor the social good of the masses. It exists for the exploitation of the worker and  the enrichment of the capitalist class. It is an organised system where the machine is merely the means through which the social relation of owner and wage-slave is maintained. All innovation, inventions,  scientific achievements of knowledge are made subservient to this.

The state is just a servant of commerce. The only people who have the power to use the laws to their benefit are those who control the means of production and profit from them. A mere change of personnel in this field does not satisfy the Socialist Party. The wage system remains. The exploitation continues. And it will carry on, “until the workers take control of the land, the mines, the factories and the means of production, and abolish the wage system.” We are wage-workers, wage-slaves, and we bear the signs of this system on our backs like a cross. The abolition of the wage system is our organization’s expressed goal, to which we must cling with conviction.

To illustrate what a wage slave is, suppose you owned a fine car and some one should say to you, "I want to use your car until it is all worn out. I will give it fuel and oil enough to keep it running until it can't run any more." Surely you would not agree to that proposition. You wouldn't allow anybody to use your car until it was all worn out just for fuel and oil. If you are a wage-worker that is what you are doing with your body. The capitalists use you until you are all worn out and all they aim to give you is what the chattel slaves got, what the serfs got, what a horse gets, a bare living, and on many occasions you are not even sure of that. How about your children? You spend many happy hours teaching your children new things and long years are spent upon their education. When they get to be young men and women then the capitalists say to you, "We want to use your children to produce wealth for us and for our children. Just as we have used you to produce wealth for us, so our children want to use your children to produce wealth for them when we are gone." You ask, "What are our children to get for the use of their bodies during the precious years of their lives?" and the answer is the same, "fuel and oil". A mere subsistance wage. The endless cycle that starts and ends with work. Work to get money, to buy food, to get strength to work. Every increase in the productivity of labour, every invention, every victory of science and triumph of genius, only goes to increase the wealth of a parasite class while the workers are only supposed to get what slave classes always got, a bare living and often not even that. This is wage slavery, the foundation of capitalism. We need  to reflect that of the six billion inhabitants of planet Earth and  all but a comparatively few are hungry, are insecure, are slaves.

Our party philosophy is based on the fact that everything in the universe, from atoms to solar systems, is continually moving, changing, transforming, developing; likewise the history of the human race is nothing but a ceaseless change, a continuous development. We accept the Marxist analysis regarding historical materialism.  In the course of its history classes are formed; these classes continually struggle for supremacy and, after prolonged struggle, one class succeeds another in the dominating position. The struggle continues until class divisions themselves are dissolved and a new, classless society results. But although these struggles and changes are ceaseless, the apparent velocity of these motions greatly varies at different periods. There are times when whole series of important changes take, place so rapidly as to take one's breath away, to be followed by long periods of apparent stagnation, when social evolution seems not only to be standing still but even to be going backward. Of course, this is only an illusion, for, as a matter of fact, historical forces are continually at work, only their manifestations are of a more spectacular nature at one time than at another.

The new society, of which we speak, a system in which there are no more classes, no more wage workers and no more social  parasites, can not be realised without a class struggle. Capitalism based on production for sale will give way to production for use. Thus will end the world's last class struggle. The age-long exploitation of man by his fellowman will cease forever, and this will be the crowning achievement of the human race. The necessity that gave rise to classes in society has passed. The capacity to produce wealth has increased to a point where it is more than ample to provide sustenance for all. Production has been socialised. It remains only to socialise control of the economic structure and eliminate expropriation. Production under capitalism is anti-social. It is anti-social because it operates against the interests of the producers. What one word sums up the damnation of capitalist rule? Hunger. We must put capitalism in its grave before humanity can flourish in the world, before hunger of body and of mind and heart are forever banished.

There is no other way to reorganise society on a rational basis save through control of industry by the workers and the elimination of the price system based upon surplus value. there is only one form of  economic organisation that shows the way to this result— social and industrial democracy. The Socialist Party is preparing to take over the means of production and distribution in the interest of the human race and to banish exploitation and slavery of mind and body forever from the human scene. From its very inception, the Socialist Party was international in sentiment and scope. It formed a constituent part of the World Socialist Movement, a name deliberately chosen. From among the betrayals of the “socialists” and labour leaders during the world wars, the Socialist Party stood out conspicuously as an uncompromising champion of  principles. We, the workers, are many, though divided because of ignorance. They, the capitalists, are, few, but strong organisationally, ruthless in policy  and determined to increase in power to perpetuate their dictatorship over the hopeless existence of a robbed class.

Workers of the World, unite. You have a world and life itself to gain!