The End of the State 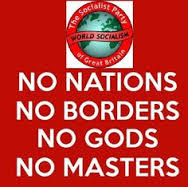 The Socialist Party has always held that with the establishment of socialism the State will disappear. The State, which exists where society is divided into an owning class and a propertyless class and is a coercive institution through control of which the dominant class imposes its will on the subject class, would lose its function when society ceases to be divided into classes. The state is a coercive institution standing above the rest of society, the state is a product of the division of society into antagonistic economic classes, and that, once these classes are abolished through the common ownership of productive resources, then the state will become redundant; its coercive features will be dismantled and its useful administrative functions merged into the democratic structure of class-free society.

The Socialist Party holds that the way to establish socialism is through political action, i.e. through a socialist-minded majority winning control of the state and using it to abolish capitalism. This done—and we don't envisage this taking very long, so that terms such as "transitional period" and "gradual decline" are quite out of place—the state is dismantled. Its coercive elements are simply disbanded. The useful administrative elements, such as those concerned with health, housing, transport, education, etc. are made more democratic and retained as part of the non-coercive administrative machinery of socialism.

The Left, who actually advocate state capitalism in the name of socialism, often speak about a so-called workers’ state. Such a concept indicates a profound misunderstanding about the nature of socialism. The state is the product of class society. It is the institution with which the propertied class defends itself against those who are propertyless.

The existence of the machinery of state coercion (government, police, courts, prisons) “is a product of society at a certain stage of development: it is the admission that this society has become entangled in an insoluble contradiction with itself, that it has split into irreconcilable antagonisms, which it is powerless to dispel". (Engels, Origin of Family, Private Property and State). "As soon as there is no longer any social class to be held in subjection . . . nothing more remains to be repressed, and a special repressive force, a state, is no longer necessary."(Engels, Socialism: Utopian and Scientific)

Marx wrote: "All Socialists understand by 'anarchy' this: the aim of the proletarian movement, the abolition of classes, once achieved, the power of the State, which serves to keep the great producing majority under the yoke of a small exploiting minority, will disappear and the functions of government will be transformed into simple administrative functions" (Conspectus of Bakunin's 'Statism and Anarchy').

Marx and Engels genuinely wanted to see established a state-free, class-free society and the means they advocated to achieve this—democratic political action by a democratically-organised working class—are still relevant and valid. An  authoritarian or a one-party dictatorship has to be ruled out as incompatible with Marx and Engel’s aim of a stateless, communist society based on voluntary cooperation. How could people be forced to cooperate voluntarily? They can only do this if they want to, which means that socialism has, by its very nature, to be the outcome of a consciously expressed desire of the majority. Because socialism can only be a democratic society, it can only come about democratically. In the phrase Marx endorsed: the emancipation of the working class can only be the work of the working class itself.

To put it simply, the state is the body which imposes the oppression of the exploiting class over the exploited class. A distinction is always made by Marxists between the state — a body of class coercion — and administration. Of course, socialism will require administration. This will be organised democratically, without the need for an elite or bureaucracy that would be in a position to administer the lives of others. When we refer to the state we are not referring to merely administrative features, such as social services for the old or traffic control.

The Left sometimes makes the claim about the need for a transition period between capitalism and socialism in which the state would be used to develop the productive forces so as to make socialism feasible. The Socialist Party does not endorse Marx and Engels' ideas on this matter, which may have been appropriate to the less developed state of capitalism of the last century, but have no applicability in the modern age of potential material abundance. There need be no transition period between capitalism and socialism: once a majority of workers understand, want and take democratic political action for socialism the new system will be established at once. It is the Left’s failure to understand the possibility of the immediate creation of a class-free society which leads them to talk nonsense about the gradual decline of the state. Having gained control of the State-machine for the sole purpose of democratically dispossessing the capitalist minority, the State will be abolished immediately. There will be no socialist State. The government over people will give place to the democratically organised administration of things.