There Is No Lesser Evil 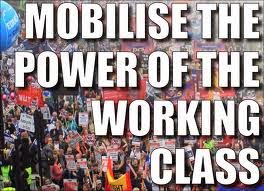 In the world today, the Socialist Party hold no control over events. The fact has to be faced that events might produce setbacks, real or apparent, despite the will or desire of socialists. While the workers are in the main not ready for socialism this is unavoidable.  The time has not yet come when the Socialist Party can consciously plan to overcome events. In the meantime, however, we reject any evils which the world offers as choice. The Socialist Party does not have to choose which is the lesser of the evils. In a world where the majority are dispossessed of the means of living and where the minority who own quarrel between themselves over possessions which should belong to society, working-class independence should remain among the first and fundamental of socialist principles. Socialists want a world based upon voluntary co-operation, in order that the products of working people’s efforts can be of free access—a world where money will not be necessary. We want people to break out of this vicious circle that perpetuates the ideas of property society. We want their thinking to be socialist thinking.

While some reforms might be able to alleviate, at least temporarily, problems facing some workers, they will never be able to solve any of the multifarious problems from which workers suffer under capitalism. This is because reforms are aimed only at treating effects while leaving the cause (capitalism) unchanged, and as long as capitalism continues it will create problems for those who depend for a living on working for an employer for a wage. More accommodation might indeed be provided for some of the homeless but the housing crisis would remain. The only lasting solution lies in the establishment of socialism, the common ownership and democratic control of the means of production with production for use not profit and free access to consumer goods and services according to self-determined needs.  The kind of socialist society we advocate is money-free wage-free market-free  based on  social cooperation.

The “lesser evil” argument is invalid because it assumes that what a government does depends on the good or bad intentions act, and their priorities, is the workings of the capitalist system. Capitalism is based on the concentration of wealth in the hands of a privileged few. Under it production is carried on for profit. The world is divided into a number of capitalist states all of which are competing against each other to sell their goods on the world market at a profit. International capital will drag governments around by their ears. How successful a state is in this is what of the leaders of the party in power. In fact what determines how governments limits its government’s actions. This is why it does not matter which party forms the government; in the end all governments are forced by economic circumstances to pursue basically similar policies. Capitalism is a class system that can only work for those who live off profits, and never for those who work for wages.

Socialism is the solution to the workers’ problems and until they establish socialism they will have to put up with capitalism and all its attendant evils. The great need is to convince the workers of the necessity for socialism and that will not be done by telling them to support a capitalist party because it is considered to be a “ lesser evil ” than some other party. By that means they will be giving support to the capitalist class to prolong this system and delay the establishment of socialism. By supporting the capitalist parties the workers are forming the tail-end of capitalist politics. Those who urge them to do that and betraying working class interests. The workers must be urged to break completely with the political parties of capitalism. They must be brought to realise that they must join a political party, separate from and opposed to the capitalist parties. Socialism is an immediate necessity. As long as capitalism lasts there will be wars, poverty, insecurity and all the rest of the evils that flow from this system. There is no “lesser evil ” to be found by supporting any one of the capitalist parties in preference to another.

If a person is robbed by two thieves, it is in his or her interest to regain his property, not to take sides with one thief or the other in their differences about the share-out of their loot, even if one of them has got a kind-looking face. When one tries to get one’s stolen property back he or she will soon find that the two robbers will sink their differences and gang up to prevent the recovering of the  goods. They will both be vicious and must be opposed.

The SocialistParty has been accused of refusing to opt for the least, or the lesser, of many evils. This argument was based on the assumption that there was something in common between the Socialist Party and the capitalist parties. Socialism is an idea which implies certain political principles and one of these is an unshakeable refusal to compromise with the enemies of the working class—with any political party, whatever it calls itself, which stands for capitalism.