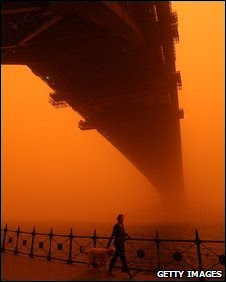 "Australia's biggest city, Sydney, has been shrouded in red dust blown in by winds from the deserts of the outback. Visibility is so bad that international flights have been diverted and harbour ferry traffic disrupted. Emergency services reported a surge in calls from people suffering breathing problems. Children and the elderly have been told to stay indoors. Sydney's landmarks, including the Opera House, have been obscured, and many residents are wearing masks. Traffic has been bumper-to-bumper on major roads. The dust blanketing eastern parts of New South Wales has been carried by powerful winds that snatched up tons of topsoil from the drought-ravaged west of the state." (BBC News, 23 September) RD
By egoutture at September 23, 2009