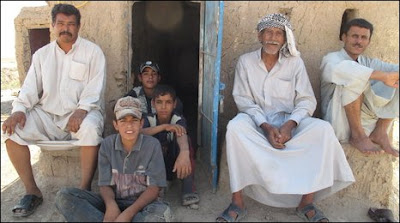 Some villagers have not seen any benefit from the neighbouring oil
installation.

"Critics of the US invasion six years ago often said its ultimate aim was to control Iraq's vast deposits of oil. So it is ironic, perhaps, that the first foreign oil company to start drilling operations in the country since 2003 should be from America's growing rival, China. A year since it signed a 23-year, $3bn (£1.84bn) deal to exploit the small al-Ahdab field, in Wasit province, south of Baghdad, China's National Petroleum Corporation (CNPC) has already struck oil. ... Iraq boasts the world's third largest reserves of oil, with many potential fields not even tapped.
(BBC News, 20 September) RD
By egoutture at September 21, 2009