THE FAILURE OF CHARITY 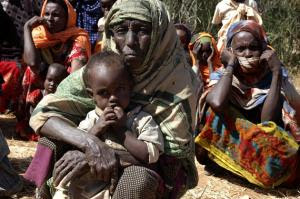 "The spectre of famine has returned to the Horn of Africa nearly a quarter of a century after the world's pop stars gathered to banish it at Live Aid, raising £150m for relief efforts in 1985. Millions of impoverished Ethiopians face the threat of malnutrition and possibly starvation this winter in what is shaping up to be the country's worst food crisis for decades. Estimates of the number of people who need emergency food aid have risen steadily this year from 4.9 million in January to 5.3 million in May and 6.2 million in June. Another 7.5 million are getting aid in return for work on community projects, as part of the National Productive Safety Net Program for people whose food supplies are chronically insecure, bringing the total being fed to 13.7 million." (Independent, 30 August) RD
By egoutture at September 09, 2009