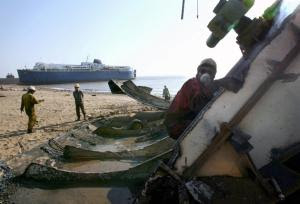 "The economic downturn and a subsequent fall in demand for cargo ships has meant that for many ship owners it makes better sense to send an ageing ship to the scrap yard rather than to keep her maintained but idle. But while the recession may have been good news for the owners of the ship-breaking firms, it is very bad news for the environment. The scrapping of ships in South Asia – Bangladesh and Pakistan are also major scrappers – is a rudimentary, almost medieval affair. Ships are allowed to beach on the sands and then armies of men with little or no training pull apart the ships with hand-tools. Toxic substances such as mercury and asbestos are allowed to seep into the environment. One of the attractions to the ship owners of having their vessels dismantled here is that the ship breakers in this part of the world receive little of the regulatory oversight that takes place in Europe or the US. For the ship owners, it means they can dispose of their ships more cheaply, while for the scrappers it means bonanza-time. ....Campaigners point out that the working conditions for the often undocumented migrant labourers from India's poorest states, can be highly dangerous and there are regular reports of injuries and fatalities. Earlier this month, six workers died when a fire broke out at one of the plots. Activists say the impoverished workers have no bargaining power." (Independent, 31 August) RD
By egoutture at September 16, 2009