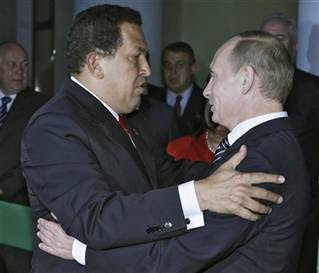 While we have a capitalist system there will always be war and threats of war, this is the latest,
of course they are for peaceful purposes.
CARACAS, Venezuela - Venezuela's leftist President Hugo Chavez said Friday that his country is buying Russian missiles with a range of 186 miles as part of a series of arms deals with Moscow.
Chavez, who on Friday returned from a ten day-tour of Africa, Asia and Europe that included a visit to Russia, is also negotiating the purchase of 100 T-72 and T-90 tanks from Moscow. "We signed some military agreements with Russia. Well, soon some little rockets are going to be arriving," he said during a speech to supporters from a balcony at Venezuela's presidential palace. (msnbc 12th September 09)
By egoutture at September 12, 2009