Neither Marx nor Engels ever drew any blueprints of the society of the future. At most they simply outlined in broad brush-strokes certain general features of socialism. They assumed, expressly or implicitly, that economic phenomena which they saw as being peculiar to capitalism would vanish with capitalism or would not survive into the age of socialism. Wages, profit and rent represented such social relationships, peculiar to capitalism and unthinkable in socialism. The same was true of the modern division of labour, especially the separation of brain work from manual labour.

The image of a future society held by Marx and Engels was a free association of completely free men and women, where no separation between ‘private and common interest’ existed: a society where ‘everyone could give himself a complete education in whatever domain he fancied’. For ‘man’s activity becomes an adverse force which subjugates him, instead of his being its master’ when there is ‘a division of labour’; everyone must then have a profession, that is a ‘determined, exclusive sphere of activity’ he has not chosen and in which ‘he is forced to remain if he does not want to lose his means of existence’. In their society, on the contrary, a person would be given ‘the possibility to do this today and that tomorrow, to hunt in the morning, to go fishing in the afternoon, to do cattle breeding in the evening, to criticise after dinner’, as he or he chose.

To most reform-minded leftists these  views of the future have always seemed either too unreal or too remote to be taken very seriously. The reformists have tried to find a compromise transitional stage between capitalism and socialism. They imagined socialism as a “re-modelled” capitalism rather than being abolished.

In a socialist world we would work, but work would take on a new meaning. It would not be synonymous with employment, which is merely the means of getting a living wage, but since it would aim at the full satisfaction of people’s needs, it would be also a way of expressing and developing ourselves to the fullest extent. True we would work to live because that is essential in any society, but we would also live to work. We should think that monotony and frustration would be well-nigh impossible under such conditions, not least of all because the heavy specialisation demanded by capitalism would disappear. And we won’t need any psychologists to try and teach us how to kid ourselves we’re happy when we’re anything but.

The establishment of socialism is prevented because the majority of the world's population do not want it: at every election they vote overwhelmingly to continue running society in the interests of the capitalist class. This is done through the State machine—the armed and police forces, judiciary system and so on. which are all controlled by Parliament. Any attempt to bypass this State machine is doomed to failure. Socialism can only be brought into being when the working class understand it and want it and express themselves by sending their delegates to the seats of control over the State machine to carry through the formal process of liquidating capitalism. This will not involve the use of soldiers and policemen to impose Socialism upon an unwilling population—indeed, when Socialism is established, the State and all its oppressive instruments will cease to exist. This is the meaning of the phrase “. . . converted from an instrument of oppression into the agent of emancipation . . ." in Clause 6 of our Declaration of Principles. There is no alternative to waiting for the people to understand but the day of enlightenment can be brought nearer if organisations like the Trotskyists and Leninists stop spreading confusion. Socialism has one meaning and one meaning only. Socialism means, and can mean, nothing less, that the community is to take all the means of production into its own hands, and that private enterprise and private property is to come to an end. That is socialism and nothing else is socialism. 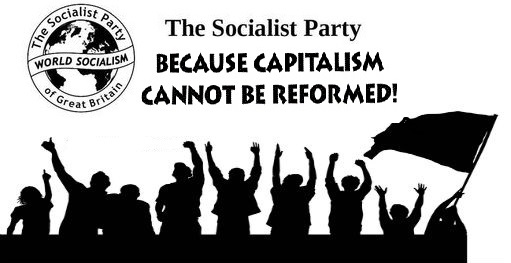