A Better World For All 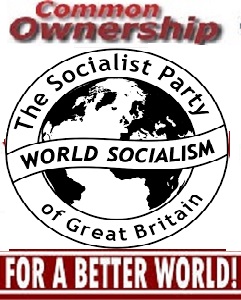 To change today’s society and to create a better future for working people is the aspiration of the Socialist Party. We hold that building a better world is both necessary and possible.

Capitalism is a system of commodity production (that is, the production of goods for sale and not for direct use by the producer) which is distinguished by the fact that labour power itself becomes a commodity. The major means of production and exchange which make up the capital of society are owned privately by a small minority, the capitalist class (the bourgeoisie), while the great majority of the population consists of proletarians or semi-proletarians. Because of their economic position this majority can only exist by permanently or periodically selling their labour power to the capitalists and thus creating through their work the incomes of the upper classes. Thus, fundamentally, capitalism is a system of exploitation of the working class (the proletariat) by the capitalist class.  Under capitalism social production replaces the individual production of the feudal era. It is based on an ever-greater socialisation of labour. However, although production is social, ownership is private. The working class produces the commodities which constitute the wealth of capitalist society, but it does not own them. They are appropriated by those who own the means of production – the capitalist class. This situation has led to a worsening of the living conditions of the masses, including escalating mass unemployment, and on the other, it has begun to awaken new forces among the working people to the necessity of establishing workers’ control over, and social ownership of, the main means of production.

Production is socialised to an ever-greater degree while the means of production are concentrated in fewer and fewer hands. Social production and the socialisation of labour are enhanced by the advance of technology, creating a material basis for the transformation of capitalism into socialism. By replacing private ownership of the means of production by social ownership, by transforming the anarchy of production which is a feature of capitalism into planned proportional production organised for the well-being and many-sided development of all of society, the socialist revolution will end the division of society into classes and emancipate all of humanity from all forms of exploitation of one section of society by another.

It seems clear enough that the capitalist system is honeycombed with corruption and that for this appalling condition there is no remedy other than its complete and final overthrow.The masters of finance and captains of industry offer daily and convincing evidence that they have but one incentive in “business” and that is to exploit the nation, control its destiny in their own selfish and grasping interest, and subjugate the working class.

Working people must have their eyes opened to the fundamental fact that there is no possible way to put an end to the political corruption without removing the cause that produces them. There is little to be gained by limiting our activities to the mere evils themselves which inflict capitalist society. As long as the source of these wrongs remains undisturbed the effects, though temporarily curbed, must again express themselves and with added malignancy. Now what is the cause of the many festering ills which we behold all about us if we but have eyes to see? The answer can be given in a single word: Capitalism.

It is capitalism, that system of society which is based upon wage-slavery, which has divided the people into two classes, the one consisting of a mass of poverty-stricken, ignorant slaves and the other of a coterie of arrogant, heartless, and polluting parasites. Between these two classes there is war — ceaseless, aggressive, and uncompromising. Capitalism has its foundations in wage-slavery and there can never be social peace while the great mass of the people who work for wages are in bondage.

The Socialist Party will excite working  people with a vision of a world of plenty. Society now has the capacity to devote the energies and talents of its people to satisfying the material, intellectual, emotional and cultural needs of all. New technology provides better, products with less labour. Radical changes in the way a society produces its wealth call for radical changes in how that society is organized. The capitalist class cannot convince the people to believe in their system while they are destroying their hopes and dreams.  The Socialist P arty will inspire our fellow-workers with a society organised for the benefit of all. A society built on cooperation puts the physical, environmental, cultural well-being of its people above the profits and property of a handful of billionaires. When the working class takes  control of all productive property and transforms it into common property, it can reorganise society so that the abundance is distributed according to need. These things will unite our movement against poverty and misery with its great cause: the fight to create a society of abundance, free from want. It will see people from all generations, from all ethnicities and from one race– the human race– come together.

It is up to the Socialist Party to show that we do have a new vision to offer.