The Socialist Party and Strategies 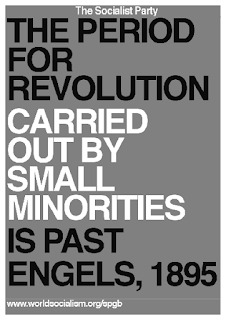 The Socialist Party is certainly aware that capitalist ruling classes in some parts of the world routinely torture and murder tens of thousands of people. That is one reason why we are against capitalism and want socialism.

If we don't advocate violence and civil war against capitalism it is not just because we want to minimise the occurrence of any violence in the course of the changeover from capitalism to socialism. It is also because we hold
(1) that it wouldn't work and
(2) that it isn't necessary.

Violence wouldn't work because what keeps capitalism going is not just the capitalist class's monopoly control of the means of violence: the capitalist class is not holding people down against their will. It is above all the fact that most people see no alternative to a social system based on class ownership, working for wages and producing for profit; they don't think you can abolish classes, privileges, private property, money, banks, armed forces, nation states.

Violence cannot overcome this lack of socialist consciousness and. if tried by a minority, even if successful could not lead to a democratic, classless society. It could only lead— and. historically, has only led—to the replacing of the previously existing ruling class by some new minority which in time evolves into a new ruling class.

On the other hand, once this lack of socialist consciousness has been overcome and a majority has come to want socialism (as it must before socialism can be established and then function) then violence is not needed. If, to keep with your example, 90 percent of people wanted socialism it would be quite impossible for any capitalist government to continue governing.

This is because governments depend on a minimum degree of consent to function. Once this is withdrawn—and especially if it is replaced by a determined desire for Socialism—then their game is up. Even supposing that the pro-capitalist minority was as large as 10 percent, it would be suicidal for them to try to use violence to maintain capitalist rule. Of course, if they did, the socialist majority would have to deal with them—we are not absolute pacifists and we don’t suppose a future socialist majority would let a handful of pro-capitalist nut-cases stop them establishing socialism.

The best way to minimise violence is for the socialist movement to proceed in a peaceful and democratic way. Hence our advocacy of using existing semi-democratic institutions including parliament. Incidentally, this is not "parliamentarism", which is the illusion that Parliament can be used to gradually reform capitalism into socialism. We are not saying workers should elect people to Parliament to reform capitalism, but only socialist delegates mandated to formally abolish capitalism.

In the Communist Manifesto Marx and Engels did indeed say that the only way the workers could win political control was through a violent insurrection but that was in conditions where political democracy did not exist. When they went into exile in Britain they supported the Chartist's demand for "one man. one vote" on the grounds that, if achieved, this would be equivalent to potentially placing political power in the hands of the working-class majority. Later, at a meeting in connection with the Congress of the International Working Men's Association in The Hague in 1872. Marx went on record as saying:
“We do not deny that there are countries, such as America and England, and if I was familiar with its institutions. I might include Holland, where the workers may attain their goal by peaceful means".

Again, in 1880. he helped to write the preamble to the programme of the French Workers Party which declared that to obtain the collective control of the means of production workers in France should use:
“all means that are available to the proletariat, including universal suffrage, which will thus be transformed from the instrument of fraud it has been till now into an instrument of emancipation".

What socialists should do depends on the assessment by the socialist movement of the contemporary situation and its possibilities. This was Marx's position too and why he didn't stick dogmatically to the view he expressed in 1848 when and where conditions had changed.

The Socialist Party has often tried to convince reformers in charities such as Oxfam and Friends of the Earth that their idealistic pleadings will not influence the inevitable, dominating drives of capitalism. They are doomed to failure. Getting governments to change is impossible. The fact is ‘government’ is not understood – they presume its function is to act in the best interests of the people when it just the executive control of capitalism.

Even though it is quite possible to ‘green’ the planet and feed everyone they do not understand the fundamental reason why this can’t happen today – someone has to make a profit from it. We cannot get them to understand the nature of commodity production, buying and selling and money and profit prevent attaining the world they want. Many reformers think futile reforms will achieve their aims. These reformist positions must fail, the only real change can be by changing the very social system of which these are just symptoms.

They probably assume they are radical and energetically pursue these reforms but, for the ‘respectables’, consideration of the real alternative is “Steady on, you’re going a bit too far in wanting a total revolution, and end to money, profits, commodity production, wage slavery and government itself.” No, they are for too nice and sensible, they think appeals and tinkering with the present system is far enough. What a waste of energy. 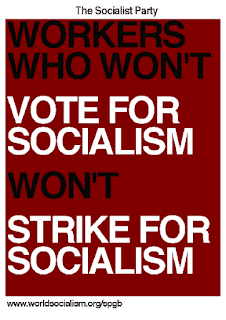 Large and small capitalists are united in one class to exploit the working class. The elimination of the small capitalists, or the more equitable distribution of trade, or capital, among capitalists generally, matters nothing to the workers. The more closely the latter examine all such questions the more convinced will they become that, for them, the one question that transcends all others is their exploitation as a class.