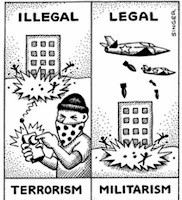 The American journalist had an interesting article on the value placed on different people's lives .
He begins with reference to history when in the days before child labour laws, the business of insuring working-class children, who were then quite valuable to poor families, achieved enormous success. The courts assessed the literal value of an earning child to a family.
During the Vietnam War, as part of the American pacification program, U.S. officials made what were called "solatium payments" for wrongful deaths caused by American forces. Back then, the U.S. valued Vietnamese adults at about $35 , while children's lives were worth about $15.
The practice continues in its wars in Iraq and in Afghanistan .
For example :-
9-year-old boy, shot by one of our soldiers who mistook his book bag for a bomb satchel - $500
An Iraqi journalist shot on a bridge - $2,500 to his widow .
In early March , a platoon of elite Marine Special Operations troops in a convoy of Humvees were ambushed by a suicide bomber in a mini-van and one of them was wounded. As the convoy made a frenzied escape it layed down a deadly field of fire along a ten-mile stretch of road. Their targets, according to a draft report of the U.S. military investigation of the incident were Afghans, on foot and in vehicles who were "exclusively civilian in nature" and had engaged in "no kind of provocative or threatening behavior." In the process, the Marines were reported to have murdered "12 people -- including a 4-year-old girl, a 1-year-old boy and three elderly villagers" -- and wounded 34 - And the blood money payed ? - $2,000 per death to family members as condolence payments .
The family or spouse of a loved one murdered on 9/11 was also given a monetary value by the U.S. government -- on average $1.8 million, thanks to the September 11th Victim Compensation Fund , created by an act of Congress, and thanks to 33 months of careful, pro bono evaluation of the worth of an innocent American life on the basis of the victim's estimated lost lifetime earnings. The total September 11th payout figure was in the range of $7 BILLION
In Iraq , total official payments for wrongful deaths, as well as for injury and collateral property damage, caused by American troops, had reached $20 million by the end of 2005. The figure now stands minimally at $32 million, made unofficially "at a unit commander's discretion."
The value of an innocent civilian slaughtered by al-Qaeda terrorists on September 11, 2001 to his or her family: $1.8 million.
The value of an innocent civilian slaughtered at Haditha, Iraq, by U.S. Marines: $2,500.
The value of an innocent civilian slaughtered by U.S. Marines near Jalalabad, Afghanistan: $2,000.
To the American military, all human life has a value - But it is calculated in dollars and cents .
And , of course , for the American government , the life of one of its citizens is much more valuable than the life of any foreigner .
By ajohnstone at May 15, 2007 No comments: Links to this post