one law for the rich , another for the poor

Five years ago Scotland’s wealthiest woman Stagecoach tycoon, Ann Gloag, to defend her privacy challenged the right to roam legislation, winning her battle against the Ramblers Association Scotland and Perth and Kinross Council to erect a fence around a 12-acre area of Kinfauns. Yet she is now happy to proposal to build another house which has led her neighbours to complain that it would ruin their privacy and seclusion.

Forestry Commission Scotland also objected, warning authorities that were the scheme to go ahead, it would ruin an area of ancient woodland and was in direct contravention of planning policies.

As part of the local authority’s decision to approve the plans for the new properties, Gloag will pay a £12,790 “education contribution” fee as a condition of the planning permission. The money will be used to fund improvements and increase pupil capacity at the nearby Kinnoull Primary School.
Socialist Courier wonders what does constitutes a bribe? 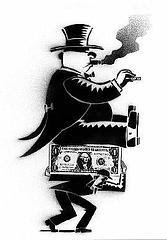 We have already mentioned the good fortune of Brian Souter of Stagecoach but lo and behold The Herald reports he has added a further £6.4 million to his vast personal wealth after exercising share options in the Perth transport giant. Souter this week bought 4.36 million shares at between 27p and 85.75p apiece under options granted between 2002 and 2004. The exercise netted Souter a paper gain of £6.4m, this being the difference between what he paid for the shares - £2 million - and the value of that holding now, which is £8.4 million .

He recently pocketed more than £100 million when the company returned £700 million to shareholders, and was last week granted deferred bonuses worth nearly £800,000.

Souter retained the shares bought this week and now holds a 14.72% stake in Stagecoach worth £201 million. Souter's sister, fellow Stagecoach founder Ann Gloag, has an 11% stake in the company and pocketed more than £70 million from the recent return of cash to investors .

Souter and Gloag rocketed from ninth to fourth in the league table of Scotland's wealthiest individuals, with an estimated combined fortune of £770 million.
By ajohnstone at July 06, 2007 No comments:

Further to an earlier post Lord Smith of Finsbury, the president of the Ramblers Association, has attacked the court decision to limit access to the countryside near Ann Gloag's home has indeed hit the nail on the head .

"Much of the land Mrs Gloag wants to fence off can't even be seen from the castle itself. This is more about privilege than it is about privacy...Even more disturbing is the reason Sheriff Fletcher gave for his decision. He said that it was because Mrs Gloag was wealthy and had a high profile that she was entitled to a higher degree of protection. This sounds to me very like one law for the rich and another for the poor..."

Mrs Gloag, who along with her brother Brian founded the Stagecoach bus company, is worth an estimated £395m .

Why should Lord Smith be so surprised . The law has always favoured the wealthy and the powerful . We at Socialist Courier don't expect that to change .
By ajohnstone at June 21, 2007 No comments:

For Capitalists it is indeed private property

One of Scotland's richest women has won a landmark legal ruling to ban ramblers from entering the grounds of her Perthshire estate . Ann Gloag is the first private individual in Scotland to exempt her land from right-to-roam legislation.
In his judgment, Sheriff Fletcher said that the "nature of the building and its prominence" meant a larger section of surrounding land was required by Mrs Gloag to ensure her family's privacy and enjoyment of the house.

"This gives a green light to landowners to go around the countryside erecting fences without planning permission." - Dave Morris , Ramblers Association Scotland
By ajohnstone at June 12, 2007 No comments: