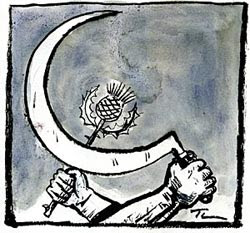 The esteemed Scots poet , Hugh MacDiarmid , was both a nationalist and a member of the Communist Party of Great Britain but also it seems , a bit of a fascist , to boot .

According to new research into his correspondence MacDiarmid believed that a Nazi invasion of Britain would benefit Scotland. The author of A Drunk Man Looks at the Thistle believed Hitler's Germany would be a more benign ruler than the UK government at Westminster.

MacDiarmid flirted with fascism in his early thirties, when he believed it was a doctrine of the left , which betrays his political savvy . In two articles written in 1923, Plea for a Scottish Fascism and Programme for a Scottish Fascism, he appeared to support Mussolini's regime.
By ajohnstone at April 05, 2010 No comments: Links to this post