The SNP would allow American bases on Scottish soil after independence – as long as they were non-nuclear. And just who would be doing an inventory check in a military escalation and crisis?

Salmond said the SNP’s support for entry into Nato was “to send a signal to our friends and partners that we wanted to assume responsibility as a responsible friend and partner.” Whats that about who sups with the Devil sups should have a long spoon? Salmond wants him in our back-yard.

On his visit to the United States Salmond spoke at the Carnegie Council for Ethics in International Affairs, a New York-based group set up in memory of Scottish philanthropist Andrew Carnegie (see here and here for this despicable man's history), and said: “Both the Declaration of Arbroath, with its search for a Scottish legitimacy, and the Declaration of Independence, with its affirmation of popular sovereignty, were sealed in the force of arms and struggle."

All nationalism is based on mythical history and nations have to create their ideologies from whatever scraps come to hand. Scotland is no exception and is perhaps luckier than most with its many tales of romance. The 6th April marks the anniversary of the signing of the 1320 Declaration of Arbroath.


"Yet if he should give up what he has begun, seeking to make us or our kingdom subject to the King of England or the English, we should exert ourselves at once to drive him out as our enemy and a subverter of his own right and ours, and make some other man who was well able to defend us our King; for, as long as a hundred of us remain alive, never will we on any conditions be subjected to the lordship of the English. It is in truth not for glory, nor riches, nor honours that we are fighting, but for freedom alone, which no honest man gives up but with life itself." - Declaration of Arbroath or properly titled "Letter of Barons of Scotland to Pope John XXII".

Stirring patriotic stuff. That it had ever existed was soon entirely forgotten and it was only rediscovered when a version of it was published by Sir George Mackenzie in 1680. It then becomes influential, but not really as an expression of nationalism but as support for those who wished to curtail royal power. It was only later that the Declaration of Arbroath came to be seen in purely nationalistic terms.

Scotland in 1320 was a very different country to the Scotland we know today therefore we should not ahistorically give to a medieval mind-set the sensibilities of a later, modern age. So we should what did the signatories of the document actually mean by "we" and "freedom"? The "we" who attached their seals to the document were all noblemen. And it was their freedom that it concerned. The authors of the Arbroath declaration most likely used the word "people" to mean "people like us". There you have it. The “people” of Scotland were the nobles, the majority of whom at that time were still fairly much culturally Anglo-Norman, despite inter-marriage within the indigenous Scoto-Gaelic ruling families and their further integration in terms of land holding and property ownership. As for the common-folk of Scotland; they had no say in the matter. Or in anything for that matter. The idea that the peasant in the fields or labourer in the towns had any type of say is laughable. The Declaration signatories certainly had no concept of popular sovereignty.

Those medieval signatories to the 1320 Declaration of Arbroath were merely feudal barons asserting their claim to rule and lord it over their own tenants and serfs, not leading any "liberation struggle". In fact, John de Menteith, who turned William Wallace over to Edward of England put his seal to the Declaration of Arbroath.

The claims that the Declaration challenged the traditional belief in the Divine Right of Kings and promoting in its place the notion that the nation itself was foremost and the monarch merely its steward, is argued solely to justify Bruce usurping the rightful king John Balliol, who it should be remembered Wallace acted as Guardian for. The section of the Declaration reading “if this prince [Bruce] shall leave these principles he hath so nobly pursued, and consent that we or our kingdom be subjected to the king or people of England, we will immediately endeavour to expel him, as our enemy and as the subverter both of his own and our rights, and we will make another king, who will defend our liberties” should be read as a cautionary warning and a veiled threat to Robert the Bruce himself for he had switched his allegence several times in previous years.

In a propaganda war, the Scots were at a disadvantage . The Pope in Rome had excommunicated Bruce who had decided to hell being just an English lord, I’d rather be a Scottish king and to achieve that goal murdered his chief rival in a church. He sent three letters to the Pope. The first was a letter from himself, the second from the Scots clergy, and the third from the nobles of Scotland that became known as the Declaration of Arbroath.

The lesser-known earlier 1310 Declaration of the Clergy (the clergy being usually the younger sons of the nobles) proclaimed the Kingship of Robert. It begins by stating that John Balliol was made King of Scots by Edward Longshanks of England, but goes on to criticise Balliol’s status, because an English King does not have any authority to determine who will be the King of Scots. Such authority rests with the Scots themselves and alone, ignoring the fact that the Scottish nobles had given up that right in negotiations with Edward over twenty years beforehand.

The Declaration stated: “The people, therefore, and commons of the foresaid Kingdom of Scotland, ...agreed upon the said Lord Robert, the King who now is, in whom the rights of his father and grandfather to the foresaid kingdom, in the judgement of the people, still exist and flourish entire; and with the concurrence and consent of the said people he was chosen to be King, that he might reform the deformities of the kingdom, correct what required correction, and direct what needed direction; and having been by their authority set over the kingdom, he was solemnly made King of Scots... And if any one on the contrary claim right to the foresaid kingdom in virtue of letters of time past, sealed and containing the consent of the people and the commons, know ye that all this took place in fact by force and violence which could not at the time be resisted.”
Like a lot of such grandiose statements we've seen down through the ages, the Clergy's declaration was nothing more than misleading propaganda, which sought to disguise the facts of history.

A more modern myth connects the Declaration of Arbroath with the American Declaration of Independence because both enshrined in their declarations the principle that sovereignty rests with the people. Firstly, as noted already it was not a "declaration" in the sense of the American Declaration of Independence or the French Declaration of the Rights of Man but a plea to the Pope. The Act of Abjuration (1581), where the Dutch deposed their Spanish ruler for having violated the social contract with his subjects could be just as easily cited as the influence on the American Declaration of Independence. Or even the English Declaration of Rights, which deposed King James II and brought to power William and Mary of Orange can be said to have had an influence on the Founding Fathers.
Nor should we over-look that although the Declaration of Arbroath says that the King of Scotland can be deposed if he abuses his power one hundred and five years earlier than the Declaration of Arbroath, at Runnymede, King John was forced to sign Magna Carta, giving his English subjects rights including the right to establish a monarchs rule. Nor should it be forgotten that between 1320 and 1603, Scotland had 11 monarchs. 3 of those (James I, James III, and Mary) were removed through assassination, civil war or deposition. In the same period, England had 18 monarchs. Of which no fewer than 7 (Edward II, Richard II, Henry VI, Edward IV, Edward V, Richard III, and Jane) were removed through civil war or deposition. So who, exactly, had the richer tradition of overthrowing monarchical power?

If heroes are required then instead of Wallace or Bruce, the Scottish workers should look to the likes of Wat Tyler and John Ball, commoners, who in the 1381 Peasants' Revolt took London and beheaded the Archbishop of Canterbury. The true history of the exploited is about the resistnce of the Levellers and Diggers and the Chartists not the winners and losers of aristocratic family feuds for the throne of Scotland.
By ajohnstone at April 06, 2013 No comments: Links to this post 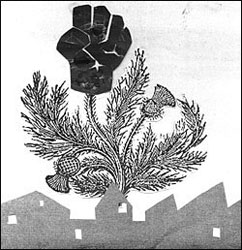 Salmond will launch the SNP's campaign for  independence later this month claiming he is on track to win secession following last week’s local government elections. The Alpha and Omega for the SNP is the Scottish Saltire fluttering over a fully independent parliament. Lets not make any mistake, the cause of Scottish suffering is not the Union with England but the fact that the means by which Scots must live are in possession of a class which will not allow the people to use these means unless they accrue profit to that minority parasite class. Socialist Courier has shown that the Scottish capitalist class obtained their possessions by theft, that in the process of the thievery thousands of workers’ lives have been sacrificed.

Our allegation that capitalism was built upon the robbery and murder of the workers is fully justified yet the nationalists receives them with welcoming open arms, ignoring the fact that the patriotism of the master class, like their pretences of kindness, generosity, and magnanimity, is sheer hypocrisy and cant. The capitalist’s love of his country withers before a fraction percent on the yield of his capital. He has no scruples in displacing the Scot's worker with machinery, directly he can save wages by so doing or by exporting jobs and investment abroad if the returns prove greater.

Scots sing of Bonnie Scotland and its purple heather covered hills. Its not their Bonnie Scotland, nor their heather hills. A typical Scot could scarcely fill a flower-pot with the land he owns in Scotland. Its the bosses' Scotland. It is their hills. The government acts as their factor, serving their interests.

All nationalism is based on mythical history and have to create their ideologies from whatever scraps come to hand, and the Scots version is no exception.  But perhaps luckier than most with its many tales of romance.  But we should not  ahistorically give to a medieval mind the sensibilities of a later, modern age. Such as the idea of Wallace was an early exponent of “democratic patriotism”. Wallace never fought for an abstract “people” or even “nation”, but always in the name of a legitimate power of which he was but the temporary protector or “Guardian”  -  the disposed king, John Balliol. It was William Wallace's sole aim to restore Balliol to the throne of Scotland. And those medieval signatories to the 1320 Declaration of Arbroath were no more than feudal  barons asserting their claim to rule and lord it over their own tenants and serfs, not leading any  "liberation struggle". In fact, John de Menteith, who turned Wallace over to Edward of England put his seal to the Declaration of Arbroath.

Little known fact!
Edinburgh branch of the Socialist League was launched with a meeting of 500 in 1885. In 1887 William Morris writes in the Socialist League's Commonweal "In Edinburgh which is the most bourgeois town in Britain, we are able to get our halls filled Sunday after Sunday with the very best of workmen.They mean business..." Between May 1887 and May 1888 40 open air meetings and 29 indoor meetinhgs were held.
By ajohnstone at May 06, 2012 No comments: Links to this post