In case it perhaps have gone un-noticed considering the initial publicity (and the Scotsman has deemed it not worthy of a follow up story)  but the police investigation of thousands of e-mails released to the Sunday Times by INEOS in its smear campaign against Steve Deans, a trade union official,  were found  “there is no evidence of any criminality." in the words of Police Scotland.

Cameron has ordered an investigation into union tactics in the wake of the threatened closure of the Grangemouth oil refinery, that saw Unite members picketing the homes of INEOS directors.

The review will be led by QC Bruce Carr, who acted for  British Airways against the trade unions in court when it blocked plans for a Christmas strike by Unite members in 2009.

The Lesson from INEOS


There is a post-mortem taking place amongst the labour movement and the Left parties about the developments at Grangemouth. The Trotskyist group Socialist Party of England and Wales/Socialist Party Scotland have followed their usual party line. The UNITE leadership were at fault for not staging an occupation and calling for nationalisation. The old leaders should be  substituted by them as new leaders who would defy the law and go down fighting rather than capitulation without a fight. Bantam-weights should square up to heavy-weights. It is all about the perfidy of union bureaucrats. Others accuse the unions of being the enforcers and the agents of capital.

The point is that the context of the struggle at Grangemouth was not shaped by Unite but they were instead simply reacting and responding to factors beyond their control i.e. victims of the ebb and flow of the demand for world fuel and how corporations finance themselves under global capitalism.

The union itself is an inadequate form when the entire working class has to be mobilised because the employers are already fully mobilised. A union - even an industrial union - only acts for its members interests. It is the reason for the socialist part. A socialist political party exists for the class. It's about how to advance a class struggle from the industrial field to the political battle. The trade unions can bargain with the capitalists over wages and conditions, but they cannot bargain away the wages system. A socialist's task is not to fight for better terms in the sale of labour-power - we rightly leave that to those better positioned ie the employees and their representatives themselves, but it is to fight for the abolition of the capitalist system.

We live in times of mass de-politicisation when class consciousness is arguably at an all time low and any level of work-place organising is minimal and undeveloped. The trade union movement has contributed  to this current situation and should take responsibility, as the first step towards fixing it. Yet while the unions are indeed weak and often compromise with employers, the idea that unions are some kind of class enemy, out to hoodwink the workers, is wide of the mark. Yes, trade unionism has an mediation role within capitalism but our priority has to be how we organise in the workplace at this point in time. It is necessary to still work within unions until we are in a position to replace them with something better (workers councils?). How we get from where we are now to how we'd like it to be, especially given the current levels of organisation and class consciousness, is important and there are no easy answers.

The Power of Capital

The lesson on the power of the capitalist has been re-learned at Grangemouth.

Unite's general secretary Len McCluskey said shop stewards had decided to accept the company's survival plan "warts and all" in the wake of the closure decision. That included a pay freeze, ending of a final salary pension scheme and other changes to terms and conditions which had initially been rejected by staff in a union vote.

Workers who struggle to maintain and better their conditions should be commended, but until the working class consciously and politically organise to end the wages system the same battles will have to be fought over and over again. The bitter experience of the Ineos workers may lead some of them to question the basis of capitalist society, but from start to finish all this struggle was attempting was to get the best from a bad situation. Workers are learning by bitter experience. They are learning very slowly. Our job is to shorten the time and try to speed up the process.
By ajohnstone at October 24, 2013 No comments:

Yet again Ian Bell of the Herald appears to be on the bell with his latest article which the following are extracts, as reading The Herald online is now protected by a pay-wall subscription.

“When the Unite union threatened a strike for this weekend, the company asserted that Scotland would be shut down by a reckless action. Yet with the threat averted, Ineos elects to close its site regardless. It, too, has demands.

Ineos would blame trades unionists for that, of course. Ineos always blames trades unionists. The  Swiss-based concern and Jim Ratcliffe, its multi-billionaire (worth upwards of £3 billion in 2010) ,main shareholder and chairman, have no record of embracing unions. Instead, since 1998, Ineos has grown by cutting wages, stripping out pension schemes and altering working practices.

Ineos wants to be rid of a pension scheme it deems "unaffordable". Once again, it wants to pay less in wages. Not for the first time, duress is inherent in each and every company statement. If workers do not comply, a £300 million investment required for "long-term survival" will not be forthcoming.

The union analysis shows a company describing capital expenditure as a loss. This is an unusual, if perfectly legal, accounting practice, to put it no higher. It shows that the deferring of a tax allowance of £117m implies an expectation of a half-billion profit in the years ahead. It shows that the growth in both sales and operating profit could hardly be healthier. But Ineos won't have it: all such views are "naive" and fail to grasp why a conglomerate would shuffle money between its divisions.

What is plain is that, having faced down the possibility of a strike for which it was strangely well-prepared, the footloose multinational is now exerting maximum pressure on its workforce, the politicians and the general population. The charge is that unions, those which once supposedly "held the country to ransom", have nothing on Ineos.

This is industrial relations in the modern style. If employees are a bar to profit, reduce their cost. If politicians quibble, make them aware of how much they depend on the company to keep the public quiet. Grangemouth contains Scotland's only refinery. Until we cure the oil addiction, it could hardly be more important. But it operates on the whim of a billionaire with his headquarters in Switzerland.

Grangemouth workers do well enough, by most standards. Why should they not? Like their colleagues in oil extraction they do hard, essential work on which the country depends, work from which multinationals extract profits vastly greater than any wage bill. Ineos prefers not to regard productive labour in those terms. Workers are the human nuisances in otherwise flawless accounting procedures.

Now, even for decently-paid industrial workers such as the people at Grangemouth, the terms have been altered. The deal is that there is no deal. One million of the young unemployed, and among those younger and a little older, know this far better than the rest of us.

At the heart of it all are the big employers. They've had all the tax breaks, subsidies and helpful legislation they could ever demand. For thanks, they avoid their obligations, reduce their workers to peasants, and treat government as a helpline. These are oligarchs regarding the inhabitants of a democracy as serfs. The question becomes: for how much longer will the serfs tolerate that treatment?”
By ajohnstone at October 21, 2013 No comments: 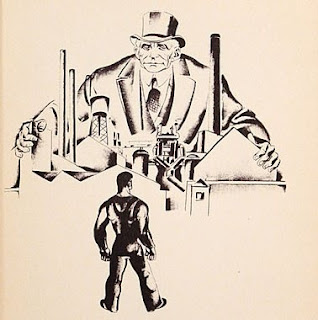 Unions in dispute are often depicted as selfish workers striking out of self interest. These workers are striking to prevent their company’s pension scheme being undermined for future workers joining the scheme. They are standing up to protect the pensions of future generations of workers in their industry. Isn't that altruism ? Isn't that self-sacrifice ?

Jim Ratcliffe, 55, owner of the strike-torn Grangemouth refinery , reported to be 25th in this years Times Rich List with wealth of £2.3 billion will have no doubt secured the future of his future generations and progeny .

Ratcliffe has grown Ineos rapidly by making ever-bigger acquisitions funded mostly with debt, says Breakingviews.com. “How come, one might ask? Surely even in today’s markets where liquidity is sloshing around, one needs to fund at least 20% of a deal with equity?” Ratcliffe gets round that requirement by using Ineos as the equity – focusing single-mindedly on growing cash flow to increase the company’s debt capacity. “That way, Ineos is ready to be used as collateral for the next deal”, ensuring that “every few years, he can triple or quadruple in size”.

Nor is Ratcliffe averse to blackmailing .

Having acquired ICI’s Runcorn chlorine plant in 2000, “after one of the longest due diligence exercises in recent history”, Ineos decided it had been “sold a pup” and began petitioning the taxpayer to bail it out. Ratcliffe went for broke, asking the Government for £300m: the alternative, he said, was the closure of the plant with the loss of some 133,000 associated jobs.
The press consensus was that “Ratcliffe of Runcorn should be sent packing”, but he nevertheless still managed to extract £50 million.

BP and Shell will together make record profits of more than $68 billion this year if the oil price stays at current levels, according to City forecasters.
By ajohnstone at April 27, 2008 No comments: