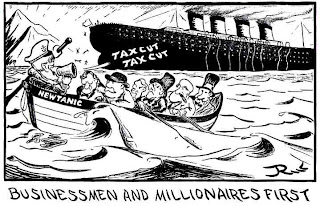 The name Martin Gilbert cropped up in a previous blog on Socialist Courier for being an over-paid fat cat parasite . Seems as if we aren't the only ones who question his worthiness .

Pirc, which advises largely public sector pension funds has singled out Aberdeen Asset Management for criticism in its latest review, branding as "excessive" last year's £4m pay package for chief executive Martin Gilbert. The company's annual report revealed at the end of December that Gilbert was paid a £2.6m bonus during the year, on top of a basic salary of £435,000, and also received pension contributions of £890,000. The total of £3.95m compared with £1.2m the previous year.

Pirc is urging its members to vote against Aberdeeen's remuneration report at the annual meeting next week claiming that its chief executive annual bonus equivalent of 656% of salary and an LTIP (long-term incentive plan) award of 312% of salary is indeed extravagent .

Pirc is very welcome to contact the Socialist Party and we will gladly furnish them with a further list of overpaid capitalist bureaucrats .
By ajohnstone at January 11, 2007 No comments: