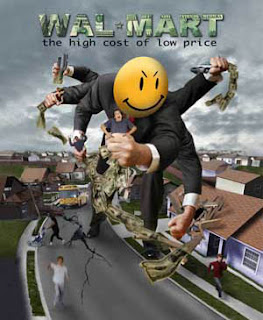 Wal-Mart ( ASDA here in the UK ) prides itself on cutting costs at home and abroad, and its Mexican operations are no exception. Wal-Mart is taking advantage of local customs to pinch pennies at a time when its Mexican operations have never been more profitable. 19,000 youngsters between the ages of 14 and 16 work after school in hundreds of Wal-Mart stores, mostly as grocery baggers, throughout Mexico—and none of them receives a red cent in wages or fringe benefits.

The use of unsalaried youths is legal in Mexico because the kids are said to be “volunteering” their services to Wal-Mart and are therefore not subject to the requirements and regulations that would otherwise apply under the country’s labor laws. Although Wal-Mart’s worldwide code of ethics expressly forbids any “associate” from working without compensation, the company’s Mexican subsidiary asserts that the grocery baggers “cannot be considered workers.”

Wal-Mart is Mexico’s largest private-sector employer in the nation today, with nearly 150,000 local residents on its payroll. Wal-Mart de Mexico reported net earnings of $1.148 billion in 2006 and $280 million in profits in the second quarter of this year, a 7 percent increase in real terms over the same period last year and have announced plans in February to add 125 new stores and restaurants to its existing network of 893 retail establishments during the course of 2007. That expansion plan will represent new investment totaling nearly a billion dollars

In a country where nearly half of the population scrapes by on less than $4 a day, any income source is welcome in millions of households, even if it hinges on the goodwill of a tipping customer. But says Federal District Labor Secretary Benito Mirón Lince. “In economic terms, Wal-Mart does have the capability to pay the minimum wage [of less than $5 a day], and this represents an injustice.”
By ajohnstone at August 02, 2007 No comments: Links to this post