The New Statesman in December 2016 had Yo Yushi visit a Star Trek convention in Birmingham where he recalls amongst other things," In a 1988 episode of The Next Generation, the captain of the USS Enterprise, Jean-Luc Picard (Patrick Stewart), lectures a 20th-century executive who has been defrosted from cryogenic preservation about the Federation’s economic beliefs.

“A lot has changed in the past 300 years,” he says. “People are no longer obsessed with the ­accumulation of things. We have eliminated hunger, want, the need for possessions.”


The businessman protests that without money his life would have no purpose. Picard responds that “the challenge” of life is merely to “improve yourself”, and to “enjoy it”. If that sounds striking today, it was doubtless more so when the episode first aired in the United States, just a year after Gordon Gekko’s “greed is good” speech in Wall Street gave the free-market Washington consensus its most abiding slogan. 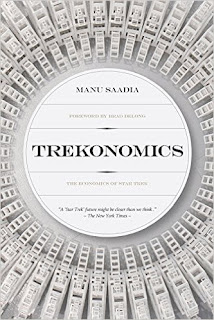 Socialists of our kind have been ahead of this learning curve for over a hundred years.  Although not the main theme, or even a minor one, it is clear from the characters’ behaviour and occasional asides (at least in the first two series) that it’s a money-free world. Set in the 23rd and 24th centuries, scarcity no longer exists as anything material needed to meet human needs can be produced by ‘replicators’. This prompted one trekkie, Manu Saadia, to write Trekonomics: the Economics of Star Trek that appeared earlier this year and which sparked a discussion on ‘post-scarcity economics’.

Actually, ’post-scarcity economics’ is a contradiction in terms as academic economics defines itself as the study of how societies and individuals allocate scarce resources. The opening chapter of a typical American textbook (Economics by Byrns and Stone) is headed ‘Economics: The Study of Scarcity and Choice’. Paul Samuelson, in his much more widely-used textbook of the same title, invents ‘The Law of Scarcity’:

‘If an infinite amount of every good could be produced, or if human wants were fully satisfied, it would not then matter if too much of a particular good were produced. Nor would it then matter if labor and materials were combined unwisely… There would then be no economic goods, i.e., no goods that are relatively scarce; and there would hardly be any need for a study of economics or ‘economizing’. All goods would be free goods, like air.’

This is not a ‘law’ but a definition and an odd one at that. In its normal sense ‘scarcity’ means there’s not enough of something, that it’s in short supply. But economics defines it as a situation where Samuelson’s ‘infinite amount of every good’ cannot be produced, i.e. as the absence of sheer abundance.

For Byrns and Stone  ‘a world in which all human wants are instantly fulfilled is hard to imagine.’ But this is just what Star Trek  does imagine and what its creator, Gene Roddenberry, insisted should be a background assumption. It is thus a direct challenge to economics and economists.

Accusing Roddenberry of espousing ‘utopian socialism’, a certain Gardner Goldsmith asserted that a ‘no-money society’ was a fantasy:

‘Like Roddenberry, many thinkers have tried to envision a world in which there is no need for money, no market exchange, and no property. And every one of those thinkers, whether be they followers of John Lennon, Michael Moore, or Karl Marx, has overlooked one key insight: man’s nature does not change.’

As if we hadn’t heard that one before! Paul Krugman made a more intelligent point that, while replicators might be able to produce material things in demand, they wouldn’t be able to provide services.

Star Trek is of course fiction. But Roddenberry’s assumption raises the question of what humans would do (besides exploring space) if they didn’t have to work to satisfy their needs. Provide services for each other perhaps?

Even in 2-300 years time humans will still have to put in some work to satisfy their needs, if only to maintain the replicators. But this doesn’t undermine the case for a society based on common ownership of the means of production where exchange and money would therefore be redundant and where people work at what they do best and take according to their needs.

Scarcity has already been conquered, not in the economists’ eccentric sense of the absence of sheer abundance, but in the sense that the resources, technology and human skills already exist to produce enough satisfy likely human needs and wants. No need to wait for the invention of replicators to establish this down here on Earth in the 21st century.

Adapted from a Cooking the Books article in The Socialist Standard

By Matthew Culbert at January 25, 2017 No comments: Links to this post