If only we had known

According to ex-Labour MP Tam Dalyell memoirs, the veteran Labour politician's suspicions about Blair were first aroused when he spoke to one of the former prime minister's teachers at Fettes.

The teacher said: "Be careful of Blair – he's a superb actor, he's good at getting others into trouble but avoiding it himself. In fact, he's a shit..."

By ajohnstone at August 17, 2011 No comments: Links to this post

Tony Blair have bought a £4 million stately home that once belonged to the late Sir John Gielgud, it was reported . The Grade 1 listed mansion in Wotton Underwood, Buckinghamshire, has seven bedrooms, a drawing room, ornamental gardens and two paddocks. The house, South Pavilion, built in 1704, is said to have been snapped up by the Blairs before being put on the open market. It has undergone extensive renovation since it was Gielgud's home and now includes a four-bedroom converted outbuilding.

The Blairs' property portfolio already includes two houses in London, two flats in Bristol and a home at Trimdon Colliery, Co Durham, in his former constituency.

Seems as if he has no problem with the credit crunch that his pay-masters in the banking world created .
By ajohnstone at May 04, 2008 No comments: Links to this post

My , isn't he going to be busy man for business . First he has a job with J P Morgan Chase Bank as reported here , although the fee turned out to be 5 times what we believed at the time - $5 million a year . Now Zurich Financial Services AG, Switzerland's biggest insurer have said former Tony Blair has agreed to advise the company on international politics according to Bloomberg.com .
Blair will specifically help the insurer with its climate initiative, the Zurich-based insurer said today in a statement. He will also advise Chief Executive Officer James Schiro on general political trends and developments. No word on the filthy lucre yet though, but it's rumoured to be another half million or so .
By ajohnstone at January 28, 2008 No comments: Links to this post 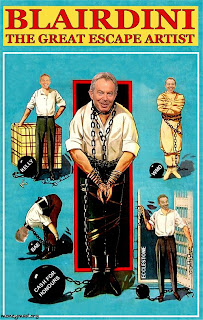 Tony Blair has taken a part-time post with US investment bank JPMorgan , one of Wall Street's leading banks, part of JPMorgan Chase & Co, a global financial services firm with assets of $1.5 trillion (£760billion) and operations in more than 50 countries. Blair has been employed "in a senior advisory capacity", the bank said ,
Advising the bank on the "political and economic changes that globalisation brings" according to Blair himself .

It is not known how much JPMorgan will pay him, but some estimates say more than $1m (£500,000) a year. The bank said he had a "unique perspective".

Blair would advise the firm's chief executive and senior management team, "drawing on his immense international experience to provide the firm with strategic advice and insight on global political issues and emerging trends... Our firm will benefit greatly from his knowledge and experience," the bank said.

Blair earlier told the Financial Times he planned to take up "a small handful" of similar roles with other companies in different sectors.
"I have always been interested in commerce and the impact of globalisation. Nowadays, the intersection between politics and the economy in different parts of the world, including the emerging markets, is very strong."

As prime minister he was always a representative of the capitalist class and now , without the need to disguise the fact to the British elector , Blair can openly and shamelessly promote world capitalist interests .
By ajohnstone at January 10, 2008 2 comments: Links to this post

Troops Out of Iraq

Just only 2% of Basra residents believe that the presence of British troops since 2003 has had a positive effect , says a BBC poll .

But , of course , they were never sent there in the first place for the benefit of the local inhabitants , no matter how much and how often Tony Blair tries to keep preaching to us .
By ajohnstone at December 14, 2007 No comments: Links to this post

The Blairs cash in 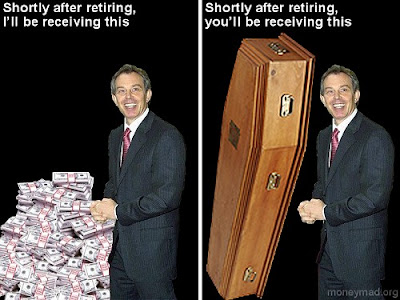 Cherie Blair has struck a deal to publish a "warts and all" autobiography in a deal reported to be worth £1 million . Her memoirs will be published in October next year .

Mrs Blair's £1 million advance will be paid in three stages – an upfront payment of £300,000, then £300,000 when her book is handed over and the rest when it is published.
Blair , himself , could earn £6 million from his own memoirs but for the moment he is in no hurry to write them.
By ajohnstone at September 20, 2007 No comments: Links to this post

A previous blog revealed that under Tony Blair the gap between the richest and the poorest had widened . The Scotsman confirms that indeed this is the case .

The think-tank , Compass , has issued a report that finds that people living in the affluent London borough of Kensington and Chelsea now live, on average, 10.9 years longer than people from Glasgow. That inequalities in mortality rates for children born to working-class mothers compared with middle-class ones have also grown since 1998.

The publication said the share of national wealth owned by the richest 1 per cent in Britain had risen from 17 per cent in 1991 to 24 per cent in 2002, while the share of the country's riches held by the bottom 50 per cent of people had dropped from 8 percent to 6 per cent. It warned that massive house-price rises and huge pay hikes for executives in industry and commerce were fuelling the growing gap between rich and poor.

"The super-rich have, during Tony Blair's premiership, been accumulating wealth at close to four times the rate of the ordinary person." says the report

The poor , more probably than not , disillusioned by all the previous broken promises of the politicians are now deserting the democratic process. The difference between voter turnout between the highest and lowest social classes had reached 17 per cent - the gap in voting habits was "probably wider than at any point since the abolition of property requirements" in the early part of the 20th century .
Rather than political apathy , the Socialist Party entreats the working class to acknowledge the class war , to intensify the class struggle , but also to finally transcend Capitalism itself by building Socialism .
By ajohnstone at May 29, 2007 No comments: Links to this post

Rich and Poor - No Change After Blair

The gap between Britain's rich and poor again widened in the 2005-6 financial year, official figures showed on Thursday .

The figures have barely diverged since Blair came to office in 1997.

"The latest evidence suggests that income inequality may be increasing again," the ONS said. "Inequality still remains high by historical standards -- the large increase which took place in the second half of the 1980s has not been reversed."
By ajohnstone at May 17, 2007 No comments: Links to this post

The Wages of Sin

Once he leaves Number 10, Tony Blair is entitled to an immediate prime minister's pension of £63,000 and he will still earn a MP's salary of £60,000. Added to this, Cherie Blair, as a leading QC, is estimated to earn a six-figure salary.

In 2004, the Blairs took out a 95% mortgage on a £3.65million townhouse in Connaught Square near Hyde Park, London. This year, they bought the adjoining mews house for £800,000. These two purchases - combined with the £200,000 remortgage of their Sedgefield constituency home, Myrobella, in 2003 - mean they now have interest payments of more than £20,000 a month. This is almost as much as the average annual salary.

However, the Money Programme has calculated the Blairs could make £10.5 million in the next 12 months. Sir John Major has reportedly made £1m a year since he left Downing Street, while Lady Thatcher amassed a fortune after she stepped down in 1990. Both Sir John and Lady Thatcher took up positions in the City, but surprisingly, the £75,000-a-year salary for five to six days' work a month may not make financial sense for Mr Blair. Many experts believe that Mr Blair's earnings could dwarf those of Sir John and Lady Thatcher.

A US businesswoman and confidante of Mrs Blair, Martha Greene, has registered the Blair Foundation website, which will be used to promote his good causes. Ms Greene is also organising the refurbishment of the Blairs' Connaught Square house.

Bill Clinton left the White House in 2001 . Since then, he has turned his retirement into a money-spinner worth between $10 million and $50 million . In 2005, Mr Clinton earned just less than $5 million for 29 speeches - and it has been reported that he has earned almost double that in 2006. Last year, on one particularly lucrative day in Canada, Bill Clinton made $475,000 for two speeches.

Mrs Blair has already appeared on the professional lecture circuit. She reportedly charged £100,000 for a tour of Australia and £30,000 for a single event in the US. One year on the lecture circuit, the Blairs could probably make in excess of $5 million it is estimated .

And of course there is Tony Blair's memoirs - an advance in the region of £8 million . Indeed , the memoirs should be entitled "The Confessions of an Unrepentent Sinner " with his " I would do it all over again because i believed i was right ." arrogance .

"I am not going to beg for my character in front of anyone. People can make up their own mind about me," he told the BBC -Well , Socialist Courier have done just that , and our conclusion - An anti-working class war criminal .

Bliar or Brown-nose -Who Cares

Our opinion on the resignation of Tony Blair and the impending anointing of Gordon Brown ?

Different cheeks on the same arse .

When a senior civil servant , a member of the Senior Management Structure of the Foreign Office and First Secretary in the UK Mission to the United Nations in New York from December 1997 until June 2002 disputes all that the Prime Minister claimed for justifications for the Iraq War people should listen . In fact , people should know , yet this evidence until now was kept secret . The Independent carries his statement which has now been published by the Commons Select Committee on Foreign Affairs .

Carne Ross, one of Britain's key negotiators at the UN , alleges it was a commonly held view among British officials dealing with Iraq :

That any potential military threat from Saddam Hussein's had been "effectively contained". Iraq's ability to launch a WMD or any form of attack was very limited. There were approx 12 or so at the time unaccounted-for Scud missiles; Iraq's airforce was depleted to the point of total ineffectiveness; its army was but a pale shadow of its earlier might; there was no evidence of any connection between Iraq and any terrorist organisation that might have planned an attack using Iraqi WMD. No intelligence that Iraq had any intention to launch an attack against its neighbours or the UK or US .With the exception of Israel , none of Iraq's neighbours expressed any concern that they might be attacked .

That the UK warned the USA of "regime-change" and bringing down the Iraqi dictator which would lead to the chaos of Iraq collapsing which the world has since witnessed.

That "inertia" in the Foreign Office and the "inattention of key ministers" combined to stop the UK carrying out any co-ordinated and sustained attempt to address sanction- busting by Iraq, an approach which could have provided an alternative to war , and that the existing sanction system was having a damaging humanitarian effect.

That the clearest evidence of the illegality of the war is the fact that Britain had sought an authorising resolution from the United Nations Security Council and failed to get it.

That Hans Blix at no time stated unequivocally that Iraq was not cooperating with the inspectors. The Security Council reached no such judgement either.

That even when Blix and UNMOVIC were still inside Iraq carrying out the inspections , the UK and USA were conducting pre-invasion softening-up air attacks against Iraqi installations .

Blair , Bush - War Criminals . But it is Capitalism that must be condemned .