Beware of rebels who laugh, dance and sing.

"The Song of the Low Classes'

Sentenced in 1848 to two years imprisonment.
“An amalgamation of classes is impossible...these two portions of the community must be separated distinctly, dividedly and openly, from each other, CLASS AGAINST CLASS. All other mode of procedure is mere moonshine.” - Notes to the People, 1850

Other poetry of his here 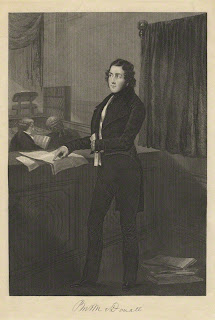 "KINGS ARE BUT GIANTS BECAUSE WE KNEEL"

Good People, put no faith in Kings, nor merchant-princes trust,
Who grind your hearts in Mammon's press—your faces in the
dust—
Trust to your own true thought! to break the Tyrant's dark dark
ban;
If yet one spark of freedom lives, let man be true to man.
We'll never fight again, Boys! with the Yankee, Pole, or Russ.
We love the French as Brothers, and the fervid French love us!
We'll league to crush the fiends who kill, all love and liberty,
They are but Giants because we kneel, one leap, and up go we!

Trust not the Priests, their tears are lies, their hearts are hard and
cold—
The welcomest of all their flock, are fierce wolves fleeced with gold;
Rogues all! for hire they prop the laws, that make us poor men
sin.
Ay! tho' their robes are black without, they've blacker souls
within.
The Church and State are linkt, and sworn to desolate the land—
Good People, twixt these foxes tails, we'll fling a fiery brand!
Who fears the worst that they can wreak, that loveth liberty?
They are but Giants because we kneel, one leap and up go we!

"Back tramplers of the many! death and danger ambusht lie?
"Beware ye! or the blood may run! respect a nation's cry.
"Ah, shut not out the light of Hope! the People blind, may dash
"Like Sampson in his strong death-grope, and whelm ye in the
crash.
"Think how they taxt the People mad, that old regime of
France,
"Whose heads, like poppies from Death's sythe, fell in a bloody
dance.
Ye plead in vain! ye bleed in vain! ah! Blind, when will ye see,
They are but Giants because we kneel! one leap, and up go we?

We've fought and bled, while Fortune's darlings slunk in
splendid lair,
With souls that crept like worms in buried Beauty's golden hair!
A tale of lives wrung out in tears, their grandeur-garb reveals,
And the last sobs of breaking hearts, sound in their chariot wheels.
But they're quaking now! and shaking now! who've wrought the
hurtling sorrow:
To-day the Desolators, but the desolate To-morrow!
Loud o'er their murderous menace, wakes the watchword of the
Free.
Kings are but Giants because we kneel! one leap, and up go we!

Some brave and patriots hearts, are gone, to break beyond the
wave,
And some who gave their lives for love, have found a prison-
grave,
Some, have grown grey with weeping! some have fainted by the
way,
But youth still nouritures* within the hope of a better day.
O! Blessings on world-conquering youth! God's with the shining
band!
Their spirits breathe of Paradise! they're freshest from his hand!
And looking on the People's might, who doubts they shall be
free?
Kings are but Giants because we kneel ! one leap, and up go we!
* Nurtures.

Born in a hovel in Tring, on 29th May 1828, (Thomas) Gerald Massey was the eldest son of an impoverished and illiterate canal-boatman. Massey said of himself that “he had no childhood,” for on reaching the age of eight he was put to work in the Town’s silk mill where his twelve-hour days spent labouring in grim conditions added between nine pence and one shilling and three pence to his father's meagre earnings. He later worked in Tring’s then-thriving straw plaiting industry producing braid for the straw hat trade in nearby Luton and Dunstable. Thanks to his mother, Mary, Massey received a scant education at a “penny school”. Despite these tough beginnings, he learned to read and write using the Bible, Bunyan, Robinson Crusoe and Wesleyan tracts left at the family home.

A Chartist Tour of Scotland

Robert Gammage was a Chartist activist and is best known for his History of the Chartist Movement, published in 1854. In 1843 he embarked on a speaking tour of Scotland, lecturing in many small towns. It makes an interesting read and an insight into the history of the working class in Scotland.

'Recollections of a Chartist'

Now I was about to go to Scotland —
“Land of brown heath and shaggy wood,
Land of the mountain and the flood."

I walked to Annan, a little town about half way between Carlisle and Dumfries, and addressed a well attended open air meeting, and I was congratulated at the close on my lecture and its reception. I stayed at an inn, at that time the principal inn in the town. I had but rarely seen such a 'spread' for supper as was set before me, brought on one of those old-fashioned mahogany trays which I had indeed seen in my boyhood, but never supped off. There was meat in abundance, bread and cheese, and a jug of 'good Scotch ale.' I slept well, a pretty good sign of a quiet conscience. Macbeth might murder sleep, but I did not, nor did sleep murder me, for I felt all alive on the following morning, and breakfasted on pre-served salmon and fresh egges . And what, it may be asked; did you pay for all this? I need not be ashamed to own it, seeing that I paid all that was charged, and that was the sum of 2s.! When I offered the servant a little gratuity for cleaning my boots, it was with evident reluctance that she received it. What think you of that, travellers of these faster days?

Another upload of lectures given by Stephen Coleman , this time part of a series called Socialist Thinkers and , in this talk , it is James Bronterre O'Brien , one of the leaders of early workers movement , the Chartists , that Coleman discusses .

Again , many thanks to "Brooklyn" Darren for taking time to make these talks available to the internet .