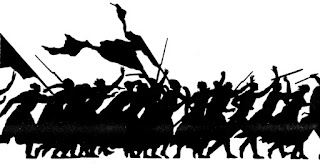 Our companion blog Socialism Or Your Money Back carries an interesting post on protests and demonstrations.

This, too, explores the topic of how to express ideas for change.

Demonstrations are meant to reveal the strength of popular opinion or feeling and they are an appeal to the “democratic conscience” of the State. That’s the theory. However, if the State authority is open to democratic influence, the demonstration wouldn’t be necessary; if it is not receptive to peoples opinion, it is unlikely to be influenced by an empty show of force containing no real threat. It would now seem that the true function of demonstrations is not to convince the existing State authority to any significant degree. Such an aim is only a convenient rationalisation. It is an assembly which challenges authority by the mere fact of its coming together. The demonstrators present themselves as a target to the so-called forces of law and order. It is in the nature of a demonstration to provoke violence upon itself. Its provocation may also be violent. But in the end it is bound to suffer more than it inflicts. This is a tactical truth and an historical one. The historical role of demonstrations is often to show the injustice, cruelty, irrationality of the existing State power. The larger the movement, the more powerful the police ranks that will be mobilised, and the greater the escalation of the violence.

An increasing number of people have recognised the futility of the huge peaceful  marches. In the past, the government viewed these pacifist marches with apprehension, but today they are accepted as part of the scenery. Recent demonstrations have become increasingly more militant and therefore more violent. Methods formerly accepted – such as sit-downs and rigid obedience to stewards and police – are being abandoned as obsolete. In its place has come the gesture politics. Relatively small groups of “autonomists” , the black bloc,  take to the streets, faces masked, for ritualised attacks on symbolic property and clashes with the police. Disorder would feature prominently in television news broadcasts, and then ...everything would return to normal. If you really want to transform society, mayhem proves no serious strategy.

Massive, defiant protests aimed at decisive political change ended up, in fact, ignored by the State, leaving protesters to return homes and their jobs. At the start of the Iraq war, hundreds of thousands of people marched in protest against it. The decline of the movement since then has been rapid. No one could seriously believe that even impressive demonstrations will alone stop or end the war in Iraq and elsewhere. Sometimes our protests express our genuine and sincere anger and indignation but it’s still always a matter of protests accepting that, the capitalist class run the country and we’re just trying, to make sure they don’t get away with too much.  The “practical” solutions the “radicals" offer with their chants and placards often amount to proposals for self-reform and self-regulation (after all the State is the capitalist's own state). This is indeed a pipe-dream, asking capitalism not to be capitalist! The reformists and leftists  pretend that if only the government followed different policies, it would be possible to have rising real living standards, improving health, education and welfare, and what have you. They’re lying. They even  know they‘re lying, but more importantly, the people they’re asking to take to the streets know they’re lying, so naturally people don’t come.

If slaves go on demanding that their masters loosen their chains, they deserve to remain slaves, because they accept having masters and they therefore accept slavery. We have to build a movement to overthrow our masters, and run the world ourselves, and solve its problems ourselves, instead of demanding that our masters find some solution for us. The alternative, “as everybody already knows” is socialism.  But if that’s what the Left is fighting for, why can’t they spell out (at least in broad outline), just what it means, and how they propose getting there? Why do they always avoid the issue. And when some actually do reveal their objective when it is looked closely at what sort of “alternative” the Left really want, it’s not at all surprising they don’t want to talk about it, or that many more won't listen. Most groups, at best, just want some of the most glaring injustices of capitalist society to be resolved and actually have no vision of a better world, with fundamentally different social relations.
By ajohnstone at June 18, 2013 No comments: