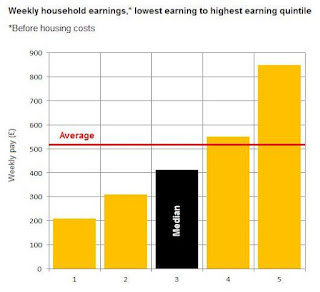 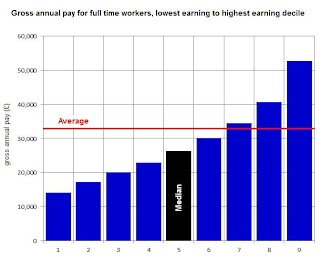 One confusion is to talk about average and median wages. The red line is the average income, and the black bar (5th decile) shows where the 'middle earner' lies. Our middle earner earns £26,200, which gives us a good idea of what a typical worker might earn. The average pay is £32,800, however around 60 per cent of full time workers earn less than this. This is the effect of a skewed balance towards higher earners.

Another common factor for confusion is between talking about individuals and households. The average UK household earns £517 a week. However only around 40 per cent of households earn more than this. The middle (the median) household, earns £413.

The "average" wage-earner and are relatively high-earning compared to most of us. The picture of what is clearer when we look to the middle rather than the average.
By ajohnstone at March 26, 2012 No comments: Links to this post