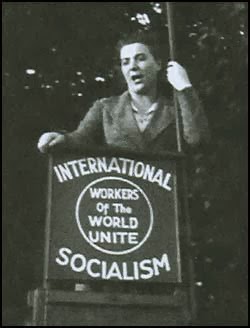 Ethel MacDonald was born in Motherwell in 1909, into a large working class family. Politically active from a very early age, she was intensely opposed to the political and economic domination of women. She left school at 16 and  joined the Independent Labour Party. In 1931 she joined the Anti-Parliamentary Communist Federation and became its secretary.

When the APCF split in 1934, she and Guy Aldred left to form a new group, the Workers Open Forum. This subsequently merged with a branch of the ILP to form the United Socialist Movement.

In 1936, the USM sent her to Barcelona to report back for the organisation. There, she became the English-speaking propagandist for an anarchist radio station, listened to in Europe and America. She was behind some of the first reports on the 1937 May Riots, when the Communist Party turned against the POUM, resulting in death squads of Stalinists assassinating prominent anarchists and 400 people being killed in street fights in Barcelona.

MacDonald often endangered her life in support of her cause. When anarchists and POUMists, were rounded Ethel MacDonald visited comrades in prison, smuggling in food and letters. She helped several foreign anarchists escape from Spain, borrowing clothes for their disguise and getting them on board foreign ships. She was finally captured and imprisoned herself. In prison she helped organise a hunger strike in every prison where there were anarchist prisoners.  She was imprisoned by Stalin's secret police, but while the world fretted about her disappearance, she organised hunger strikes among the anarchist prisoners and smuggled out letters. After questions about her absence in the Houses of Parliament and an American newspaper campaign, supporters formed the Ethel MacDonald Defence Committee. International pressure was applied and she was deported to France, eventually returning to Glasgow disillusioned. She told crowds of well-wishers:
"I went to Spain full of hopes and dreams. It promised the utopia realised. I return full of sadness, dulled by the tragedy I have seen."

She lived in a menage-a-trois with other anarchists in Gibson Street in Glasgow. John Caldwell gives a remarkable testimony." Caldwell recalled: "We were separate individuals who sometimes had it off a wee bit. "When Ethel and I were in public, we were separate people ... sex had nothing to do with other people. "But she believed I could have as many friends as I liked and she could, too." He added: "Her broadcasts went down very well. Some of the American newspapers said how pleasant her Scottish voice was. But Ethel's mother disapproved of her being with [one of her companions] Aldred. Aldred the free lover, the atheist - she didn't want it. After Ethel died, none of the family came near us at all."

'The Word' was produced by Guy Aldred plus John Taylor Caldwell, Ethel MacDonald and Jenny Patrick in Glasgow post World War 2 to the late sixties.

Ethel MacDonald died on December the 1st in 1960 of multiple sclerosis.

Ethel MacDonald was not a member of the SPGB, nor do we claim her as one of our own. In many regards she and the SPGB disagreed but she is part of the history of the Scottish working class and deserves not to be forgotten.

A documentary film "Ethel Macdonald: An Anarchist's Story?" was broadcast by the BBC in 2006