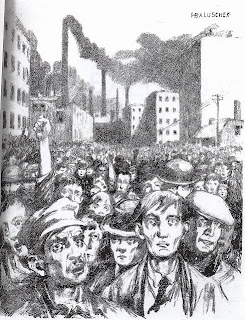 We all see the TV adverts from the Red Cross, UNICEF and Oxfam for donations to aid the starving in third world countries but what we do not expect to see are calls for aid and donations by Scottish based charities and organisations to help the poverty stricken and starving in Scotland. We live in a country that is supposed to be part of a developed nation yet it is cutting benefits alongside price hikes by energy companies.

Food banks are returning to Scotland’s streets. Not to feed the homeless and
those sleeping on the streets, but families who cannot put food on the table because they choose to heat their home rather than freeze.

According to Margaret Lynch, chief executive of Citizens Advice Scotland, she said: “The reason for the rise in food bank cases is that household incomes are not keeping up with the cost of living. Half of those who use food banks are actually working, but their wages are too low to sustain them. The other half are people on benefits, whose low incomes have been squeezed even further by harsh policies like the bedroom tax. And with more welfare cuts on the way, this situation looks set to get even worse.”
By ajohnstone at October 27, 2013 No comments:

An urgent appeal for food for families and individuals in need has been made by a Highland charity. Blythswood Care, known for transporting relief aid to Eastern Europe, said there has been an increased demand in the Highlands over the winter months.

It warned that it had already helped 340 people this year and that stocks were running low. The Highland Food Bank gives a three-day supply of foodstuffs to households in financial crises.

Co-ordinator Lorna Dempster said that the Highland Food Bank helped more than 1,700 people in 2007 - an increase of 70% over the previous year, when 1,000 clients were helped
By ajohnstone at February 27, 2008 No comments:

From the Independent , the newspaper thats rapidly acquiring the reputation for doom and gloom , another story of impending catastrophe . The era of cheap food is coming to an end .

In the UK food prices are now rising at 6 per cent a year, twice as quickly as the general cost of living . In India the overall food price index is 10 per cent higher than last year. In China, prices are up 20 per cent for some staples. A similar inflationary trend can be seen in America.

Earlier this month, wheat prices reached their highest level in 10 years. Maize prices have doubled over the past year. Rice prices are rising too. Rice prices are climbing worldwide. Butter prices in Europe have spiked by 40 per cent in the past year. Global soybean prices have risen by a half. The food price index in India was up by 11 per cent year on year. In Mexico there have been riots in response to a 60 per cent rise in the cost of tortillas. The price of cereals in this country has jumped by 12 per cent in the past year. And the cost of milk on the global market has leapt by nearly 60 per cent.

This is being passed on to the price of other foodstuffs such as meat and eggs, as much of these commodities are used for animal feed. Pork prices in China are up 20 per cent on last year . Butter prices in Europe have risen by 40 per cent in the past year.Rising global prices will hit poor countries hardest.

One reason for the price surge is the wholesale diversion of grain crops into the production of ethanol. Thirty per cent of next year's grain harvest in the US will go straight to an ethanol distillery. As the US supplies more than two-thirds of the world's grain imports (The US ships more grain than Canada, Australia and Argentina combined. ) this unprecedented move will affect food prices everywhere. In Europe farmers are switching en masse to fuel crops to meet the EU requirement that bio-fuels account for 20 per cent of the energy mix. Jean Ziegler, the UN special rapporteur on the right to food, accused the US and EU of "total hypocrisy" for promoting ethanol production in order to reduce their dependence on imported oil. He said producing ethanol instead of food would condemn hundreds of thousands of people to death from hunger.
"Recently there's been a huge increase in the demand for industrial corn for the production of ethanol which inevitably pushes up the price of food stuffs," says Dawn McLaren, a research economist at the W P Carey School of Business in Phoenix, Arizona. "But if we get a particularly bad harvest or if a weather system like El Niño strikes we could be really stuck." Mrs McLaren says that as the West looks to replace its oil, poor people will pay the price. "It doesn't strike me as a very good idea to start using yet another vital and limited resource to wean ourselves off oil,"

Other reasons for rising food prices have been several bad harvests and adverse weather. Or it could be the spike in farmers' fuel prices as a result of instability in the Middle East. Perhaps likely is a substantial global demand shift is beginning to affect prices. There is a higher demand for cereals from China and India. India has become a net importer of wheat for the first time since 1975. China is expected to become a net importer of maize by 2008.

The solutions being offered ? Greater trade liberalisation to bring prices down .
New technology - to bioengineer crops specifically to be used for fuel to minimise the effect on the food market.

But the simpler solution , to create a society where peoples needs take priority over the capitalist market is once again over-looked .
The re-organisation of resources without the requirement to provide the capitalist class with profits would address and remove many of the worlds problems of food shortages .
The answer lies in Socialism .
By ajohnstone at June 23, 2007 No comments:

From Time magazine , how the feel good factor in charity does very little to ameliorate famine .

"There's no question that food aid saves millions of lives,"

"...we're concerned that it's being asked to do too much, too inefficiently, and that by over-relying on food aid we ignore other solutions that could be more effective."

A January report by the U.N.'s Food and Agricultural Organization (FAO) put the question bluntly: Can food aid do more harm than good?


One-third of food-aid budgets never reaches the intended recipients and is instead swallowed up by costs in donor countries, according to the OECD. Only 15% of donated food is sourced locally . When food finally arrives — often too late to feed those most vulnerable — the influx of foreign products wreak havoc on the local market, depressing prices just when farmers need income to feed themselves.
Almost all U.S. food aid, by law, must be grown and processed at home. U.S. agribusiness, which receives subsidies for growing such crops, and the U.S. shipping industry profit from the arrangement. In April, the U.S. Government Accountability Office released a scathing report on how America underachieves in its attempts to feed the world, noting that the amount of U.S. food aid actually reaching beneficiaries has declined by 43% over the last five years because of escalating transport and administrative costs.

Even though plentiful grains may be harvested just over the mountain from famine-stricken areas the first instinct of most governments is still to send bags of grain rather than pursuing longer-term solutions like building roads linking local farming communities with drought-suffering regions. Ethiopia, for example, is one of the largest corn growers in Africa, but poor transportation networks prevent most farmers from selling their crops outside their villages.

"It's all well and good for the American public to feel good about their corn feeding starving people," says Edward Clay, senior research associate with the Overseas Development Institute, a London-based think tank. "But do American taxpayers realize that their money is being used to fund a hugely inefficient enterprise?"
By ajohnstone at June 19, 2007 No comments: