The concept of 'anti-imperialism' is rooted in nationalism, since it assumes that there is something unnatural about one 'country' exploiting the resources of another 'country'. All nations were created through an imperialist process that involved the homogenisation of an area under a particular local elite, and that involved the explotation of wage differences creaming off of surplus. Look at how industrial Italy dominated south, agrarian Italy.

Was the struggle by the US southern states anti-imperialist? Would the southern USA workers and slaves have been better off exploited by their local ruling class?

An anti-imperial analysis seems to get in the way of a class analysis too much -- especially since a useful class analysis should be rooted in immediate experience and struggle, not worked out using an economist's slide-rule.

'Anti-Imperialism' is anti-socialist because it leads us to support smaller controlling elites, or ignore the damage they do, in favour of just concentrating on the USA or European powers, etc.

The concept of 'anti-imperialism' comes from Lenin's immediate political needs during the USSR's war against France and Britain in 1918-24, during which any defeat for the imperial powers was good for the USSR -- and thus the working class, of course -- and so the Bolsheviks championed nationalists in  Asia, Africa and elsewhere. Similarly, later during the Cold War the USSR supported local nationalisms in order to oppose US hegemony.

Imperialism: Plague on both houses 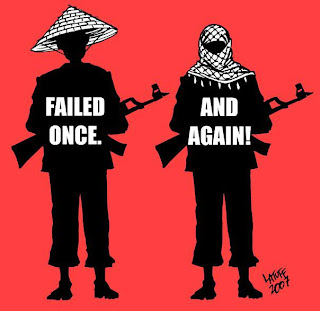 The Left-wing have just not been interested in any criticism of what has become a dogma in their circles: that socialists are duty-bound to support struggles for "national liberation". The "revolutionary" Left simply "trot" out the old anti-imperialism position of supporting the weaker country against imperialist aggression which refuses any real class analysis of war.

Lenin wrote a pamphlet which he entitled Imperialism, the Highest Stage of Capitalism. In it he argued that, through a process which had been completed by the turn of the century, capitalism had changed its character. Industrial capital and bank capital had merged into finance capital, and competitive capitalism had given way to monopoly capitalism in which trusts, cartels and other monopolistic arrangements had come to dominate production. Faced with falling profits from investments at home, these monopolies were under economic pressure to export capital and invest it in the economically backward parts of the world where higher than normal profits could be made. Hence, Lenin went on, the struggle by the most advanced industrial countries to secure colonies where such "super-profits" could be made. When, after 1917, Lenin became the head of the Bolshevik regime in Russia the theory was expanded to argue that the imperialist countries were exploiting the whole population of the backward areas they controlled and that even a section of the working class in the imperialist countries benefited from the super—profits made from the imperialist exploitation of these countries in the form of social reforms and higher wages, Lenin argued that imperialism was in part a conscious strategy to buy off the working classes in the imperialist countries. His evidence consists of one quote from arch-imperialist Cecil Rhodes , and one from Engels to the effect that the workers of England "merrily share the feast" of its colonies.

Firstly his analysis is out of date when applied to the current situation. Perhaps more importantly Lenin's theory of imperialism Lenin's theory of imperialism pitted the working class of undeveloped countries against that of the developed ones. It led to upholding national interest against class interest. Lenin's position was not a mistake. The “labour aristocracy” theory had the political purpose of enabling the Bolsheviks to argue for the workers in the colonies to form united fronts with their local ruling classes against Imperialism. This in turn had the aim of dividing the working class internationally, and turning it into cannon fodder for capitalist war. Lenin's expanded theory made the struggle in the world not one between an international working class and an international capitalist class, but between imperialist and anti—imperialist states. The international class struggle which socialism preached was replaced by a doctrine which preached an international struggle between states.