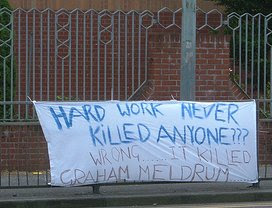 The Fatal Accident Inquiry into the workplace death of Dr Graham Meldrum heard employer Val Brown admit that he had no knowledge of any employers' legal health and safety responsibilities. Mr Brown was asked four times if he had knowledge of the various different laws which govern health and safety in the field of driving and lifting operations. Four times he replied simply, “No.”

Mr Brown, former boss of the Suzyline agency, was then asked if he was aware of employers' legal obligations under Section 2 of the Health and Safety Work Act 1974, which applies to everyone with a contract of employment. Again he replied “No.”

Dr Meldrum was killed when crushed by the faulty tail lift of an Allied Bakeries delivery truck at their Glasgow depot on 12 July 2005. Both Allied Bakeries and TNT Logistics UK were prosecuted and found guilty, but received only paltry fines of £17,500 and £14,000. Graham's employers, Suzyline agency, were not prosecuted, supposedly because of “lack of evidence”.

Some months after Dr Meldrum's death Mr Brown dissolved Suzyline – and then started up an agency called Staff Depot, based in Uddingston and doing the same work, as an agency supplying drivers.

...'twas ever thus..the nature of business in capitalism is such that the rewards for cutting corners are too great, to be overcome by puny legislation.
Workers need to take over the means of producing and distributing wealth on the basis of supplying needs, rather than as at present, maximising profits, before a sane system of health and safety can be implemented.

More on this story here.
also here
By Matthew Culbert at June 20, 2008 No comments: Links to this post