Crime Pays for Some 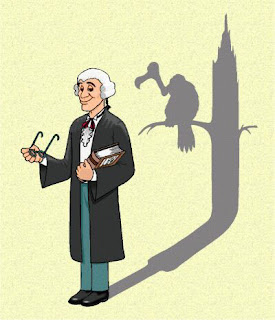 A junior barrister was handed more than £1 million in legal aid last year, it was revealed yesterday. Balbir Singh, head of Birmingham’s Equity Chambers, was paid £1,116,000 in 2005/06.

Four of the 10 top-earning criminal barristers were from the same chambers: 2 Bedford Row in London. Mr Lithman, William Clegg, QC, Jim Sturman, QC and Howard Godfrey, QC had a combined pay-out of £3.3 million.

Tuckers Solicitors was the highest paid criminal firm, receiving £8.5 million in the year from the legal aid purse. They were followed by Irwin Mitchell (£5.3 million) and Burton Copeland (£5 million).
In a separate list of community legal service firms - carrying out non-criminal work - the highest paid was Duncan Lewis Solicitors with just under £7 million, followed by Irwin Mitchell with £5.2 million.

Shakespeare's Henry VI — “First thing we do, let's kill all the lawyers” - Perhaps , on reflection that maybe a sanction a little bit too severe .
By ajohnstone at June 26, 2007 No comments: Links to this post