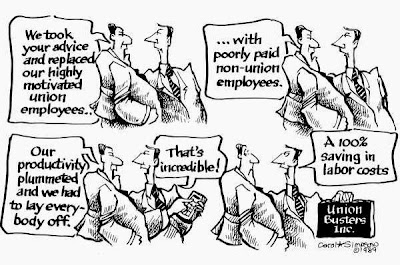 Capitalism has brought the technology and the organisation of production to a point where the potential to adequately feed, clothe and house the entire world population is reachable. But the creation of abundance would end exploitation and destroy profits, so the capitalists themselves stand as a barrier to a society fit for human beings. Socialist revolution is the only solution. The very elements of socialism, however, are being forgotten by many people in the workers movement to-day. At the moment the idea is being widely spread that by an improvement in the efficiency of capitalism the workers will be able to obtain a continuous improvement in their standard of life. The idea behind this is that the more capitalism produces wealth the better off everyone will become. This is not the case.

At the present moment the difficulties of capitalism are increasing in every country. One of the sharpest divisions of opinion existing in the Labour movement to-day is that concerning the attitude which ought to be adopted towards this capitalist attack on the wages and conditions of the working class. The reformist leaders of the Labour Party hold that capitalism is not in a “normal” condition. If wage reductions will help in getting capitalism back to “normal,” then they hold that these wage reductions ought to be agreed to by the working class. We see that this policy of calling upon the workers to make sacrifices in order to help capitalism back to normal, runs through the whole policy of the Labour Party.

Socialists contend, on the other hand, that the recessions of the capitalist system is not due to some abnormal accident which has befallen capitalism. The Socialist Party call upon the workers to resist all attempts to lower their standard of life, to unite their forces industrially and to make their resistance as widespread and as united as possible, and to go forward from that to an attack on the capitalist system itself. The more the workers unite their forces and commence to struggle against the capitalist offensive, the more the struggle becomes a political struggle, not between the workers and any group of capitalists, but between the workers and the capitalist state representing the capitalist class as a whole. If the  working-class desire to beat off the capitalist attacks on their present standards and carry out a resolute struggle to achieve their emancipation through the overflow of capitalism, they must fight more and more against any reformist policy of co-operating with capitalism. All workers who are tired of the half-heartedness and compromise of the Left, their co-operation with the capitalist class, should join the Socialist Party and help forward the struggle for complete working class emancipation.

Too many times we have had men who serve the ruling class and who get a good living keeping the working class divided. They start out with good intentions often as not. They really want to do something to serve their fellows. They leave the factory-floor as a common worker, elected to be officers of a union and they change their clothes from overalls and dungarees to a tie, white shirt and suit. They change their habits and their methods. After they have been elevated to official position, as if by magic, they are recognised by those who previously scorned them and held them in contempt. They find that some of the doors that were previously barred against them now open, and they can actually get their feet under the desk of the company chairman.  Our common worker is now a union leader and the employer pats him on the back and tells him that he knew long ago that he was a coming man, that it was a fortunate thing for the workers of the world that he had been born, that in fact they had been long waiting for just such a wise and cautious general secretary. And this has a certain effect upon our new-made leader, and unconsciously, perhaps, he begins to change. Thus goes the transformation. All his dislikes disappear and all feeling of antagonism vanishes. He concludes that they are really most excellent people and, now that he has seen and knows them, he agrees with them that there is no necessary conflict between employer and employee. And he proceeds to betray the class that trusted him and lifted him as high above themselves. Newspapers write editorials about him and praise him as a wise leader; and the CBI and Chambers of Commerce emphasise  that if all union leaders were such as he there would be no objection to labour organising.  The trade unionist who is held in high favour by management is pronounced safe, reliable and honest, and the workers are appealed to to look to him for advice, for guidance and leadership. And the union leader feels himself flattered. And when he is charged with having deserted the class he was supposed to serve, he cries out that the indictment is brought to discredit him but it is those who brings the charge who are most likely to be defamed. By whom? By the capitalist class, of course; and its press and “public” opinion.

A trade union leader who is not attacked  by the capitalist class is not true to the working class. If he be loyal to the working class he will not be on friendly terms with the bosses. He cannot serve both. When he really serves one he serves that one against the other. 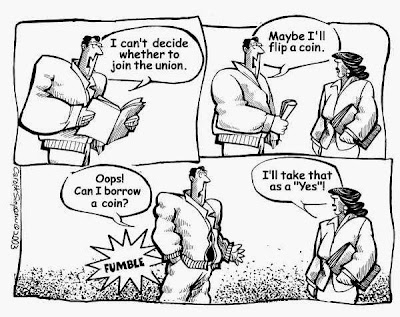 By ajohnstone at December 06, 2013 No comments: Links to this post

We Are All Leaders 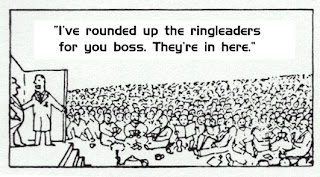 These are not times for reform and tweaking the system. Capitalism is in the process of destroying the Earth. The Socialist Party knows that no leaders are going to pull the workers into socialism. Change will not come if we wait for some other person or some other time. We are the ones we’ve been waiting for. We are the change that we seek. Mainstream politics cannot comprehend the absence of leaders in the movement and that it is not a weakness but a strength, testifying to our determination not to be followers.

Forget about looking for leaders. What we need is a movement that rises from the people and empowers ourselves. People need to stop looking up, and start looking around. There is an old adage, if the people lead, the leaders will follow. People need organisations, and people need to come together. But by self-organisation from the root, you will find that you have got no leaders - and do not want them because you do not lead them.

A leader may say “all that our organisation has gained is because of me”. But it is not so. It is not because a leader persuades the government to be nice, but because the actions of mass movements force the government to give back some of what has been taken from us.

Leaders, indeed, will sometimes pretend that they know best and that the movement depends on them. But they can do this only by with-holding knowledge and denying power from others. This is why it is important to make organisations as democratic as possible. The individual leader substitutes for and holds back the capacities of the 'led'. If we rely on one leader, or a group of leaders we are putting ourselves in a vulnerable position because we can easily be misled. Nor is there a leadership to be bought off. A leader comes to symbolise an organisation's cause and projects it on to one individual that his or her reputation and personality comes to represent and embody the cause.

The working class have nothing to gain and everything to lose by relying on leaders.

Leadership is one of those problematic words that needs qualifying. When we say "don’t follow leaders" we mean by this something very specific - a narrow political sense of the term - to denote the idea of surrendering power to an individual or group to change society on our behalf. We are not promoting the false idea that socialism is about "making everyone equal" in their endowments, abilities and so on. There will always exist those who will be better orators or write more lucidly than others.

Structure doesn't necessarily mean a leader. The best examples of organisation historically can be found in the trade union and labour movement at its best. Take, for example, the structures of trade union branches. These are a product of a long tradition of members debating, agreeing and renewing clear, transparent written rules that create a framework of mutual accountability, self-discipline and individual responsibility. They are there on paper, the responsibility of every member, to be used, contested and, once agreed, followed. That is not to deny that apathy and inertia can set in; the rules become a barrier to creative thinking and change; officials become corrupt or complacent. Yet the rules and basic principles remain, always available.

A socialist party must be a party of no compromise. Its mission is to point the way to the goal and it refuses to leave the main road the side-tracked that lead into the swamp of reformism. Nor does a socialist party advocate violence in the labor movement because it knows the capitalist class has the advantage. It is not cowardice but common sense and it is not heroism that makes a fool rock a boat in deep water, it is idiocy.

The capitalist class can gerry-mander elections, miscount and steal votes, plus resort to a thousand and one other political tricks, but such is simply to tamper with a thermometer, it cannot change the temperature. And the temperature is the organised power of the working class.

Power to no one, and to every one!
By ajohnstone at April 29, 2013 No comments: Links to this post