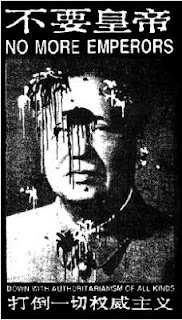 0.1% of all households in China hold nearly half of the total wealth said the report released by Boston Consulting Group.  A long way from the image of Mao's China which was that of a regimented and spartan but egalitarian society, without hierarchical class distinctions. The blatant inequalities of post-Mao China have served only to enhance the image in retrospect. Yet the image was always an illusion, a meticulously maintained lie. China under Mao was, like China before Mao and China after Mao, a class-divided society. Since 1949, all top party leaders have lived and worked under extremely privileged conditions and in virtually total isolation from ordinary people.

Mao mobilised terror witch-hunts in which anyone refusing to wholeheartedly join in would find themselves a target. He repeatedly used this strategy throughout his career to gain and hold power, culminating in the infamous Cultural Revolution, which accounted for some 100 million people being humiliated, tortured, maimed and, in 3 million instances, murdered.

His callousness is almost beyond the scope of human imagining. In one year, 22 million people died of starvation – brought about primarily through Mao’s disastrous project to make China – then one of the poorest countries on Earth – into a nuclear super-power. The famines and over-work induced by the programme led to 38 million deaths. While people starved he would gorge himself on whole chickens and huge quantities of meat and fish.

He used women almost as imperial concubines, procured from the local labour force. Anyone who objected to his and other leaders’ privileges amongst squalor were derided as “petit-bourgeois egalitarians”.

Mao was more concentrated on fighting the nationalist government than the Japanese. On the Long March (a period of retreat by the Red Army from the nationalists), Mao and the other leaders didn’t march with their soldiers: they were carried. And the workers and peasantry have been carrying the party officials ever since. It is argued that Mao deliberately meandered along the Long March in order to strengthen his grip on the party before they met up with the rest of the army.

Some quotes of Mao:

“The transformation of capitalism into socialism is to be accomplished through state capitalism….”

“Some workers are advancing too fast and won’t allow the capitalists to make any profit at all. We should try to educate these workers and capitalists and help them gradually (but the sooner the better) adapt themselves to our state policy, namely, to make China’s private industry and commerce mainly serve the nation’s economy and the people’s livelihood and partly earn profits for the capitalists and in this way embark on the path of state capitalism….”

“the character of the Chinese revolution at the present stage is not proletarian-socialist but bourgeois-democratic….”

“A certain degree of capitalist development will be an inevitable result of the victory of the democratic revolution in economically backward
China….”

“it will guarantee legitimate profits to properly managed state, private and co-operative enterprises–so that both the public and the private sectors and both labour and capital will work together to develop industrial production…” [a very 'marxist' class interpretation indeed!]

“To counter imperialist oppression and raise her backward economy to a higher level, China must utilize all the factors of urban and rural capitalism that are beneficial and not harmful to the national economy and people’s livelihood…Our present policy is to regulate capitalism, not to destroy it.”
By ajohnstone at November 02, 2012 1 comment: