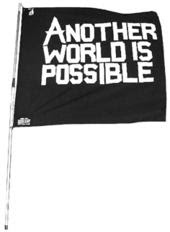 "Happy New Year" we all said to one another on Hogmanay. Even though we meant it sincerely what are the chances of it becoming a reality? Is it likely 2011 will be any better than 2010, or more likely worse? The blame game is in full swing with politicians, bankers and regulators all trying to place responsibility with someone else. And, of course, the working class are accused of starting the problem by daring to imagine that they could lead the lives of the class above them, so ending up over-stretching themselves to accept all those mortgages and other loans. There will be many innocent by-standers caught in the cross-fire of this latest in the long list of economic crises of the market system. Workers shouldn't waste their time trying to sort out this mess, or to try and better regulate it.

What is the next step as we enter the new year?

The next step is to organise – to organise for change. In groups and meetings and on the internet we need to band together to fight against the reason most of us fell fearful or miserable - the market economy itself and the politicians who oversee its operation. Without this, our "Happy New Year" greeting will be the empty platitude it usually becomes every year.

Our New Year's wish is that we will not accept the lie that this capitalist system is as good as it gets, that it's "natural", that there is no alternative to "practical politics". The alternative is called socialism. Once the overwhelming majority of workers understand it and want to implement it then that alternative will be very real and will become the only practical political solution forward. As socialists, we argue that we should stop being the helpless victims in society, prey to the mercenary forces of the market, and instead get up off our knees. As socialists we want to participate in a progression of the global community to free humankind’s real human potential.

Socialists are equal but are each different. We don’t accept leaders. Begin to free yourself, be confident, be disobedient; think for yourself, ask questions and inquire about the socialist case. We have nothing to lose but our chains. We have a world to win.
By ajohnstone at January 01, 2011 No comments: Links to this post